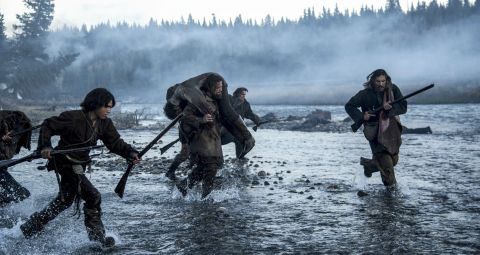 Astounding. With a director, DoP and cast at the top of their game, The Revenant is a filmmaking triumph. You cannot afford to miss experiencing this on the big screen.

It’s this feeling of vengeance that boils inside Glass (Leonardo DiCaprio) throughout much of this two-and-a-half-hour epic – and little wonder. Mauled by a bear, left for dead by his men and witness to the murder of his own son, Glass’ bleak and bloody survival in this harsh 1820s terrain is motivated by one reason alone: to even the score.

That bare outline doesn’t even begin to capture the sheer wild ambition, beauty and savagery on show in The Revenant. Far more challenging than even Iñárritu’s bravura Oscar-winner Birdman, this is his Fitzcarraldo or his Apocalypse Now – man versus the elements, both on screen and off. Stories have already spread about the legendarily arduous shoot endured by cast and crew in the Canadian wilderness. Whatever hardships they went through were worth it.

In the first five minutes, Iñárritu and his Birdman cinematographer Emmanuel Lubezki will leave you agog with a scene of arrow-whizzing, tomahawk-wielding carnage as Glass and his fellow fur trappers, led by the resourceful Captain Andrew Henry (Domhnall Gleeson), are set upon by a gang of Native Americans.

As a group of 40-odd men is whittled down to just 10, Lubezki’s camerawork ensures you’re just as captivated by incidental details as you are by the action: the sun glinting through trees, birds circling, plumes of smoke rising.

By the 25-minute mark, you’ll be literally slack-jawed for one of the most stunning scenes ever committed to film, as Glass is attacked by a grizzly bear protecting its two young. Is it CGI? Is it real footage? However it was done, the result astonishes as Glass is tossed around, clawed, bitten and even sat on, the bear’s paw squashing his head into the dirt. Like so much of this remarkably visceral film, you’ll live every moment with him – every scream and anguished howl.

While Henry is able to sew up Glass’ wounds, it becomes clear that the group won’t be able to carry him to safety through the harsh, mountainous landscape. “The proper thing to do would be to finish him off quick,” says Fitzgerald (Tom Hardy), interested only in self-preservation. Volunteering to stay with Glass, Fitzgerald is joined by youngster Jim Bridger (Will Poulter) and Glass’ half-Native American son Hawk (Forrest Goodluck), who refuses to leave his father’s side.

Soon enough, Fitzgerald is leading the escape back to civilisation, leaving Glass to die. This, of course, he refuses to do, flaunting survival skills that would put Bear Grylls to shame (not least hauling himself out of a shallow grave).

Co-written by Iñárritu and Mark L. Smith (who penned Joe Dante’s The Hole), the story is adapted from Michael Punke’s 2002 novel – itself inspired by the myth that built up around Glass after his grizzly attack. If the film has a documentary-like realism to it, Iñárritu seasons it with frequent digressions, flashbacks, hallucinations and dreams, as Glass drifts in and out of consciousness, conjuring images of his son and wife (who at one point appears floating above him like a ghost).

Glass isn’t the only man left on the mountain, though; in a parallel story, a Native American is leading his tribe in search for his missing daughter Powaqa (Melaw Nakehk’o). French-speaking fur trappers, rivals to the Captain Henry-led gang, are also in the mix. But to say more about their involvement would give away elements of the final blood-soaked act – which’ll leave you feeling especially battered and bruised.

If you’re imagining The Revenant is a film chock-full of gratuitous violence, though, nothing could be further from the truth. True, some moments are stomach-churning – not least Glass cutting out the innards of a dead horse and using it as a makeshift sleeping bag (think Luke Skywalker on Hoth with his Tauntaun).

But Iñárritu, pacing the film to perfection, never forgets that even in the most extreme circumstances there can be levity – Glass and a Pawnee Indian, for example, catching snow on their tongues.

With Lubezki’s photography at once capturing the magnificence and cruelty of Mother Nature, like the moment Glass stands by to watch a bison stampede, you’ll be left in a state of shock and awe. Will The Revenant repeat Iñárritu’s triple-Oscar swoop for Birdman? Will Lubezki gain his third consecutive golden statue? Will DiCaprio, in full-blooded form, finally shake off that Academy curse? On this evidence, it’s impossible to see how they could not.

Astounding. With a director, DoP and cast at the top of their game, The Revenant is a filmmaking triumph. You cannot afford to miss experiencing this on the big screen.