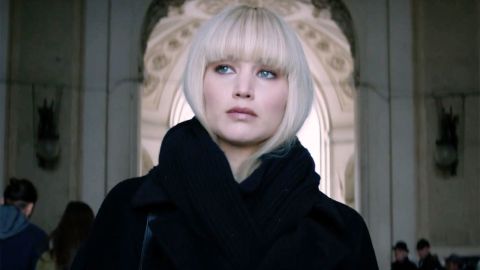 When the Red Sparrow trailer first dropped, the general consensus was that it looked like the origin story for Scarlett Johansson’s Black Widow, the one that Marvel hasn’t yet got round to making yet. Let’s make something clear from the outset: Red Sparrow is absolutely not that film. Set in the covert world of Russian sex spies, this tough-to-categorise thriller contains the sort of brutal violence, sexual assault and state-sponsored torture that would never make it into a family-friendly blockbuster. Never boring but occasionally troubling, Red Sparrow is, like its central character, a tricky one to read.

The world that is set up is certainly attention-grabbing. The story begins by cross-cutting between two very different events in Moscow. At the ballet, prima ballerina Dominika Egorova (Jennifer Lawrence) is performing on stage, while in Gorky Park, CIA agent Nate Nash (Joel Edgerton) is meeting his Russian informant. Neither evening goes quite as planned; a fellow dancer’s misstep sees Dominika’s leg broken (her dreams shattered along with the bone), while an unexpected intervention causes Nate to scarper for the nearest embassy.

After being replaced by her company, Dominika is struggling to care for her ailing mother until her seedy intelligence agent uncle, Vanya (Matthias Schoenaerts), offers her a way out. Take part in a seduction/espionage mission, and her mother’s medical expenses will be taken care of. Needless to say, the plot doesn’t go off as expected, and Dominika finds herself signed up for ‘Sparrow School’ in an isolated boarding house that trains attractive young people in seduction and manipulation, so that those skills can be used to further Russian interests in the wider world.

Once Dominika has ‘graduated’ and assumed a fake name, she’s sent to trail Nate, who’s looking to reconnect with his informant. And so kicks of a global story of double crosses and tenuous allegiances, that hops from Moscow to Budapest, the US, Vienna, London and occasionally back on itself. But for all it’s glossy production values, Red Sparrow doesn’t feel like it’s appealing to the Bond market. There’s a surface sheen, but that only exaggerates the lack of glamour present. There’s none of the fun that 007 (even Craig’s 007) finds time for. It’s difficult to know who it’s really aimed at: too grim, gritty, and short on explosions for a multiplex actioner, and a bit too graphic for the Tinker Tailor crowd. And given that it’s directed by Francis Lawrence, J-Law’s Hunger Games 2-4 director, no concessions have been made to the YA crowd. This is adult fare, and pushes its 15 certificate to the complaint-baiting limit.

The best upcoming movies of 2018

Despite a running time of well over two hours, it’s never boring, and the leads ensure it’s always highly watchable. Jennifer Lawrence commits to an impressively not-distracting Russian accent, and doesn’t flinch from the physical demands of the role, and Edgerton effortlessly essays a gruff, natural charisma as pretty much the only character with a clear moral code. Dominika herself is less easy to root for. It’s quite possible that’s intentional. Her mother warns her to hold something of herself back before she heads to the academy, and she arguably does that too well, never really letting anyone (including the audience) entirely in on what she’s thinking. For much of the story she’s somewhat passive, being moved like a pawn from one spot to the next without being given the opportunity to demonstrate her own agency. Besides the ‘sick mum’ card that’s played early on, it’s hard to know what drives her, and her characters motives are clouded by an early act of revenge she commits. The wider implications of Dominika and Nate’s missions also remain somewhat elusive.

Schoenaerts is suitably unpleasant as the primary antagonist of the piece, and there’s classy support from the dependable likes of Rampling and Jeremy Irons. Francis Lawrence marshals moments of genuine tension throughout, including a tense trade-off at a London hotel, but it never truly grips like the best conspiracy thrillers. There’s the sense that the cast are doing the heavy-lifting on a fairly straightforward story, and the frequent interjections of shocking violence mean it’s a tough film to settle into: the shocks have an almost muting effect on other aspects of the story.

Red Sparrow is based on a book by former CIA officer Jason Matthews, which is itself part of a trilogy; no doubt the movie’s producers have their eyes on a franchise. It’s hard to know how much more you’d really want to subject yourself too, though, if the tone is as brutal as this. In terms of crowd-pleasing franchise fare, you’re probably best off sticking with Black Widow.