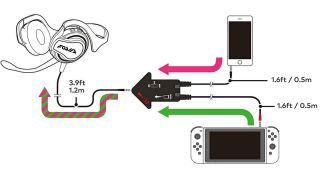 There's been no real need for Nintendo Switch to have voice chat until now and the release of Splatoon 2. Aaand, the solution is currently not very good - involving an app, a splitter, wires and patience.

It works, it's just cumbersome, fiddly and way more complicated than talking to someone on a console has any right to be.

Look at this, the full setup required for both voice chatting and listening to the game via a single headset:

I haven't tried the system yet so I'm just going on what I've been told talking to people who have, and the overall reactions. People are basically furious and I'm having to avoid some pretty swear-heavy reactions. These are just the nicest things people are saying...

As has... just about everything else

As great as the switch is, I don't understand why Nintendo just doesn't take cues from Microsoft or Sony regarding voice chat!July 20, 2017

The sheer excess of wires is getting all the jokes

Just getting this room ready to go for some Nintendo Switch online gameplay with voice chat. pic.twitter.com/fKHSoVPkTkJuly 20, 2017

There, all ready to voice chat on my Switch. pic.twitter.com/s5g4gZyCYgJuly 20, 2017

Some people are claiming that if you lock your phone while using Switch voice chat, it goes off. You have to leave the screen on😐July 19, 2017

It's a small but very pointy thorn in the side of an otherwise great piece of kit and, so far, only if you're playing one thing - check out our Splatoon 2 review to find about more about the game in general. And, if you're looking for some Switch Accessories, we've got you covered.