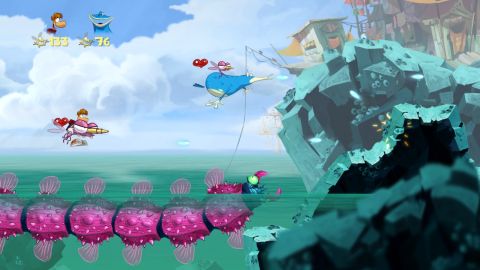 It’s somewhat remarkable that one of the strongest games in the Vita launch lineup is one that doesn’t involve any of the touchy or the feely that’s emblematic of the new handheld. Yes, the Vita is, arguably, all about how you interact with the front and back touchscreens, and Rayman Origins Vita barely bothers with any of that. But while it’s not a showcase for all the new bells and whistles on the system, Rayman succeeds at highlighting another aspect of the diminutive powerhouse: It can deliver a true console experience in the palm of our hands.

A virtually unchanged port of the PS3 / Xbox 360 release, Rayman Origins Vita looks absolutely gorgeous on the small screen. If ever there was a case for 2D gaming, this is it. High-res, packed with details, with vibrant animation that leaps off the screen in a way that most modern 3D games don’t, Rayman Origins Vita delivers a sumptuous feast for the eyes. (And ears: make sure to play this one with your best headphones. The levels are designed with music in mind, and as the platforms come to life with every touch, leap and stomp, musical flourishes accompany the action in a very rewarding way).

It’s tempting to point to our Rayman Origins review, which sums up our feelings about the game’s console version and holds true for the Vita release. But to recap: Despite the cartoony looks, this is a hardcore (and classic) platformer through and through. This is a game that values timing, precision and momentum. This is about tough challenges delivered unapologetically. It’s a simple game in its mechanics: Rayman can jump. Rayman can hover (by holding the jump button). Rayman can attack. And Rayman can run.

The challenge here is all in the level design. Every leap from bouncing bongo drum to pulsating perch, every mad dash through explosively erosive rocky peaks, every carefully charted course through dangerous waters – every single level is built with collectible bits, dangerous obstacles, and that very next ledge all perfectly positioned to be just barely out of reach. It can be crushing at times, but never in a cruel or punishing way. Instead, it kept us constantly craving perfection – a pursuit for every last secret and every last tidbit to complete the levels as best we could.

The Vita version differs from the console release in a handful of minor ways. Players can zoom in and out of the action by pinching the screen – a feature that’s we barely used at all. The Vita version also includes a new collectible type that required us to tap the screen once we found it – a nice addition. And it eliminates the co-op multiplayer. For some, that’s a big loss, but not so for us. The multiplayer was the weakest feature of the original game, often leading to chaotic, unmanageable action that might be fun in small doses but wasn’t really practical for completing the game. Then again, players can complete with a Ghost mode, challenging one another to best each other’s times. We’re not sure if that makes up for the missing multiplayer, but for us, the solo adventure is the best part of Rayman Origins, and the Vita version is easily a must-have in the launch lineup – and likely long into the new handheld’s lifecycle. It’s the perfect type of game for a handheld, easily playable in short doses or long sessions, and it’s a triumph of clever, captivating game design.