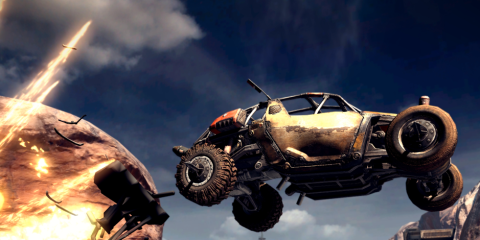 Build up, but no release?

Rage is engrossing, beautiful, and intense for the majority of its campaign, but then it begins to stumble. The first problem is recycled content, where missions forced us to return to locations we’d visited before and replay them with only minor variations in the enemies and layout. Most of these are side missions, but there’s one main mission that had us play through another main mission backward, and it’s a fairly long section, which is disappointing. Rage’s gameplay is so good, though, that it’s not a huge deal.

Above: The Authority, despite being the climactic faction to fight against, turn out to be the least interesting enemies

What’s more disappointing is Rage’s final act. For a game that has all the appearances of an epic RPG, the reality is something much shorter – we beat it in about eight hours, which included completing some, but not all, of the side missions. Length on its own is not an issue, but Rage had us believing we’re on a sprawling, epic journey that will build up to a crazy battle against the Authority, and then it just completely fizzled out. We won’t spoil what happens, but let’s just say the final sequence was anything but epic, and we literally asked as the credits rolled: “Really? That’s it?” We must stress that the last part of Rage is in no way horrible, and that the game as a whole is polished, massive-feeling, and continuously fun. It’s just that, particularly for an id game, it built up and then left us hanging. We’re still talking about a small portion of the game, which means the campaign is great for the majority of its length and the lowest it ever gets is still at least very good.

Is it better than…

Rage is many things: open-world driving and racing game, meticulously designed first-person shooter, stunning realization of a living post-apocalyptic wasteland, and it does all of these things well. It ends just as the party is really getting going, but even the pre-party is fantastic.

Note: The PC version has encountered some major problems, but it's not the same for all machines. First, if you have an ATI card, be extremely wary as many users have reported being completely unable to play the game. There has been apparently a driver released to specifically address this problem, but it seems some users still can't get the game to work. We played the game on a high-end gaming PC with an nVidia GTX 580 - while the texture popping was the least noticeable compared to PS3 and 360, we experienced very bad screen tearing, so much so that it was constantly distracting and making it difficult to pay attention to the game. There's no v-sync option in-game, and we've heard that if you try to force v-sync it can cause other problems. Apparently the game auto-detects your machine's specs, but then there are almost no graphic options you can customize yourself - just resolution, anti-aliasing, and gamma. If you don't have a high-end machine, you may experience texture popping and other graphical bugs that are even worse than the console versions. The game underneath these problems is still a great experience, but we cannot recommend a purchase until the problems are patched.