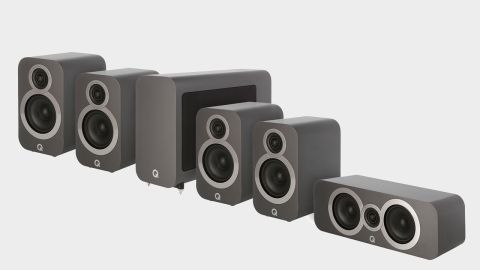 Gives excellent audio for games, as well as movies and music, with a sleek and attractive design. It costs a fair bit though and will require some planning to manage all its necessary moving parts.

With game sound being so detailed, nuanced and advanced nowadays, a full-on cinema surround system might be tempting. On paper, a big old sound system like Q Acoustics’ 3010i cinema pack will ramp up your games’ audio to blockbuster levels due to its excellence in providing the best for all other media. From which one would hope the pedigree - particularly in films - seamlessly transitions over to games. But the 3010i Cinema Pack is not an inconsiderable bit of kit (well, multiple bits) and will also set you back nearly £1000. Therefore, is it worth the investment, and what is the system like?

The speakers themselves are good-looking units. Good-looking, but chunky units: the four bookshelf speakers come in at 150 x 253 x 252 mm; the centre speaker at 430 x 152 x 216 mm; and the woofer at 480 x 300 x 150 mm. This doesn’t put me off them though and they are still able to fit in and around regular living room furniture. They’re available in a few colours such as white, wood effect, and black. I tested the graphite set and they are sharp looking things; the dark finish makes them agreeable for any living room. They have thin covers that can be attached via magnets to the front of every speaker, or left off if you prefer. Elsewhere - and this is important - the speakers can only be connected via specialist speaker cables (I used QED cables to hook mine up). This may not come as a surprise to those already familiar with home cinema systems, but it's pertinent to remember, particularly for those new to cinema sound systems who are interested in taking this big step up. This then means, by inescapable extension, that you require an amp or AV receiver, which itself must be able to take those cables too. Another hoop to jump through, if you will. The connections for these wires are the only features on each speaker, apart from a few settings on the back of the subwoofer to offer some customisation.

The speakers are complete and ready to go out of the box, but you will have to spend time placing and positioning the four satellite speakers, the woofer and the central front speaker. With them in place, the cables do become the main, and quite a particular, task here as you’ll inevitably have to guide a very long cable from the speakers to the receiver from all over the room. If you have a system ready for this, then I envy you. If not, you’ll have to get creative with hiding them strategically or start to really like looking at cables. Fair warning, but that’s what you get for that sound quality and removal of latency or audio drop out. And before you start pumping out the games, movies or tunes though, it’s worth bearing in mind that, to get the very best out of the system, you’ll need to spend that time positioning them well, but also might need to deploy the use of extra stands or mounts to help position the speakers best. There are wall-mounted or glass shelf options as well as more standard stands, all of which are equally elegant in their design too. And that will set you back some further pounds, particularly for the free-standing stands at about £100 a pair.

With the speakers in place, and as soon as you turn the audio on, you can tell why the extra time spent arranging, sorting and chasing cables was worth it. The richness, clarity and depth of the audio is immediately excellent and ramping up the volume is quite the experience - even on the PS4’s loading and background music.

In terms of games, the results are mixed, but simultaneously what you’d expect. First up, the system won’t give you an edge in multiplayer or attention-holding online games. You’ll want to get back to a trusty headset for those extra details you might miss out on with the system. That’s not to say it doesn’t perform at all well in multiplayer games, but in faster ones like Apex Legends, I did feel some of the audio subtleties and moments in high-tension scenarios were lost and not as helpfully audible compared to a headset. However, in Ghost Recon Wildlands, what with the slower pace of the game and the landscape setting, the 3010i system provided a much more enjoyable and rounded audio experience. The whispy-but-crisp sounds of the wind rushing across the landscape and the directional sound of enemies, traffic and gunfire was pretty spot on.

However, I find the audio enjoyment is at its very best when cranking it up in single player games. This is where a full-fledged, quality home cinema sound system like the Q Acoustic pack benefits home gamers. And it sort of makes sense really - the more cinematic and story-driven a game is, the closer it is to big-screen movies - broad brush strokes, but the venn diagrams do overlap.

For example, Doom was a bracing and amazing experience. The louder it went the more hair-raising a time I had. Every sound of the station, from whirrs of a machine to the crackle of electronics and clunk of heavy-duty machinery, travels around the sound system exquisitely. The weapon noises are so fun and noisy, even in the chaotic and frantic encounters. The resulting maelstrom of sound was intense. One slight downside that Doom brings to the fore is that the bass from the woofer was a bit thin at times and I had to really crank it up to get the best out of it. Which isn’t ideal.

Next up is Assassin’s Creed Odyssey and again, I had a memorable experience: particularly in populated areas, I feel really immersed through the 3010i system’s audio. Every bit of chatter, creak of timber and flap of market stall material makes those places, in particular, feel alive. But the wider world’s audio details and cues were a joy to have on such a system, too. The dialogue is also crisp and clear, and the hand-to-hand combat sounds are particularly satisfying and cinematic.

Resident Evil 2 Remake is scarily good. The audio cues for items and doors cut through well but didn’t pierce, and the atmospheric sounds of Raccoon City’s police station created a thick, perma-tense atmosphere that prevailed throughout my living room.

While playing games, I did find myself having to ensure I was in the right position all the time. It was easy to sit a fraction too close to one side of the speakers and then only be able to hear those particular speakers. This will be influenced by the specific dimensions, layout and composition of the room you’re setting it up within, and how you optimise and calibrate the speakers with an amp (assuming you get that option) but it's good to keep in mind.

Away from games, and somewhat unsurprisingly, the 3010i series cinema pack is great for films. Smashing through some top action movies like John Wick and a marvel film or two really brought to life the room-shakingly good audio available to you with this system. Dialogue was never lost on any film or TV show, and the surround sound was gorgeous, heightening and redeploying that immersive audio I had experienced in games. It also excelled with music too, with each speaker being a quality sound-giver of all music from a long metal playlist to country and pop music.

I really like the design and the sound from the speakers but - and I know it’ll go for all systems of a similar setup - it just requires an awful lot of work and preparation beforehand. Which isn’t necessarily the fault of this one system, but it's very much a factor nonetheless. Its sound quality comes latency free and probably edges out wireless systems, but am I going to be disappointed to be going back to my Samsung wireless system (even with the occasional spot of audio drop out)? Not really. But. It is great at what it does. From a gaming perspective it provided a great time, transforming the audio experience of playing games in my living room to that of playing in a cinema. To have this sound quality as one’s default audio system for the living or TV room would be a dream setup.

However, it is worth remembering that it is still going for around the £700-800 mark - and that is without the designated AV receiver or amp (if you haven’t got one already) and all the cables you’ll need. Therefore it’s not inconceivable that you’re looking at more than £1000, depending on your starting point. And that’ll have to be an all-at-once investment. Something like a Sonos or Samsung wireless system can be built up over time with smaller, incremental purchases (plus they don’t need a receiver or amp), as opposed to a single big splash like the 3010i demands. If you’re coming at this from a purely gaming perspective, eyeing up an exciting sound system, then it might not be for you. But if you’re a devourer of all entertainment media with volumes turned up to 11 then you’d be in for a treat (despite the necessary faffing and preparation).

Gives excellent audio for games, as well as movies and music, with a sleek and attractive design. It costs a fair bit though and will require some planning to manage all its necessary moving parts.

I'm one of the UK Staff Writers for the Central Hardware Team, and I take care of a whole host of buying guides, gaming tech reviews, news and deals content that pops up across GamesRadar+. I'm also a qualified landscape and garden designer so do that in my spare time, and lean on it to write about the landscapes and environments in games, offering some informed analysis of them where I can. I'm currently a good way through an Assassin's Creed-athon having started with ACIII Remastered back in March, and am currently on Syndicate. When I'm not playing solo, I'll play coop games like Wildlands with my best friend online. I just love open worlds and landscapes, OK?