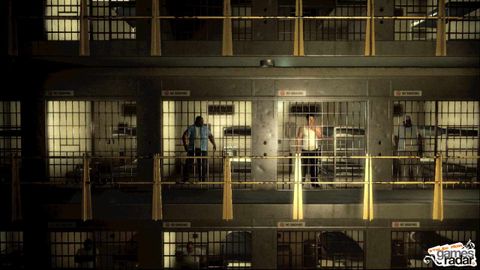 Prison Break was a really good TV series… half a decade ago. In its third season, however, its memory was indelibly soiled by a rapid decrease in quality and an equally rapid increase in outlandish plot twists, culminating in a final fourth season that felt for all the world like a hard kick to the groin for fans who’d stuck with the show.

Smart move then by devs Zootfly to focus this bizarrely belated tie-in around the pulsating premier season set in Fox River Penitentiary. As agent Tom Paxton (a ‘roided up Company patsy who never appeared in the actual show) your brief is to infiltrate the prison, get close to tattooed pretty boy Michael Scofield and – most importantly – make sure his bull-necked bro Linc ‘The Sink’ Burrows fries in the electric chair... or at least that’s the plan. Providing you can get your head around the rather contrived setup, it’s an unexpected and welcome chance for admirers of the show to catch up (and beat up) on some of the series’ best loved stalwarts.

The idea of a videogame set in a prison is interesting enough (we all remember The Great Escape on the ZX Spectrum after all): shiv attacks, sadistic guards, ‘encounters’ in the showers, smuggling contraband in body cavities, rucking in the yard, daring escapes that’d leave Shawshank’s Andy Dufresne whistling in appreciation... the material is all there, just waiting to be exploited. So what do we end up with? A linear license that’s top-heavy on rubbish fighting, unforgivably rubbish QTEs and seriously weak stealth sections.

As the new fish in this murky pond Paxton isn’t immediately able to get chummy with cautious Scofield, so is forced to voyeuristically report on him from afar. As such, he’ll need to perform certain tasks to prove his worth with the high rollers at Fox River – gigs like sneaking into the boiler room to retrieve ‘C-Note’ Franklin’s stash, or helping out mob boss John Abruzzi by spiking ‘Haywire’ Patoshik’s medication. As the game grinds on, Paxton (unsurprisingly) finds his loyalties shifting... though after you’ve beaten up your umpteenth schmoe in the silly underground prison fight club, endured countless heavy bag and bench-pressing minigames to ramp your stats up or sneaked through yet another infirmary/psyche ward/attic/sewer you’ll be begging for the lethal injection yourself.

The very same reason why hardcore Prison Break fans might ostensibly lap this up is also the reason everyone else is probably going to loathe it. See, we played this game with our rose-tinted spectacles ramped right up to their rosiest. We cheered when bullying Brad Bellic laid into Paxton, hoorayed whenever lank-locked mafioso Abruzzi turned up and shuddered at the creepy rasps of kiddy fiddler ‘T-Bag’ Bagwell – especially since the facial likenesses are uncanny and almost all the original cast are involved with voiceovers. This is fan service that verges on the stellar, even if protagonist Paxton himself is as much fun as a month in solitary.

Providing you’re a fan of Prison Break and can still remember when the show used to be essential viewing, chances are you’ll get a nostalgic kick out of this. Nobody else – apart from Gamerscore whores lured by insanely easy Achievement unlocks – will likely give a rat’s ass.