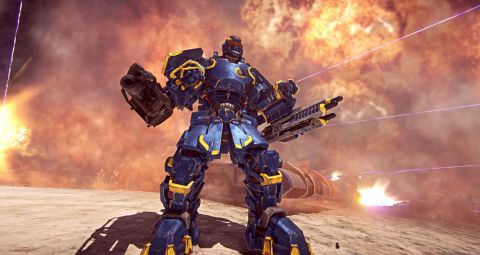 Epic multiplayer warfare at the starting price of absolutely nothing. Though battles often feel a little too big, there’s nothing quite like it on PS4.

In Battlefield, I’m the boss. In Destiny, I’m top dog. In Call of Duty I can exert my cast iron will. But in Planetside 2? I’m a drop of water in a crashing wave, a brick in a wall, a tiny idiot running around going, “Wheeee”. Daybreak's massively massive free-to-play shooter, in which hundred-person teams square off on foot and in vehicles, is more MMMMMMO. But bigger isn’t always better. PlanetSide 2 on PS4 perfectly recreates the three-tiered gameplay of the now-classic PC title as you seamlessly transition from on-foot FPS combat to tank battles to spectacular aerial dogfights, and introduces controller-friendly menus in the process. The freedom is fantastic, but too much of it often leads to a rambling, unfocused experience.

The rules are simple: fight for control of the planet Auraxis by conquering and holding outposts on various continents, which sends resources back to your team and limits opposition spawning options. It's not so much about killing as territorial control, moving uniformly through the map like a wrecking ball rather than bouncing around it like a… pinball, I guess?

It’s all spectacle. Repairing a line of stout Vanguard tanks slinging white-hot plasma over a rocky Indar ridge as smoke-spewing Valkyries roar through sunny skies will certainly get your pulse pounding. Fancy a change of scenery? Warp to Esamir and join the fracas in the frosty tree line, reviving teammates lying dazed in snow so they can storm down a hill and besiege a solar array. The action staggers a bit during frantic moments, Daybreak's reach sometimes reaching the limits of the console's capabilities, but largely this is busy, satisfying, beautiful stuff.

Planetside 2 suffers for its size in other ways, however. One dusk skirmish outside a sprawling facility simply felt like an unwinnable standoff, opponents shooting a constant stream of insta-death from the entrance, our team blindly shooting back, and medics on both sides reviving everyone. It can all feel a bit aimless, players like dispensable units in an RTS. To make an impact it's advisable to join a party or clan as soon as possible - you know, put the ‘plan’ in Planetside. Otherwise you’re alone in a crowd.

Planetside 2 has actually been out for close to three years now, first released on PC in November 2012. Due to its large-scale battles, Daybreak just weren't able to port it to last-gen platforms, but with the power of the PS4 now they are. An Xbox One version of Planetside 2 is currently in development, but the ETA on it is unknown (thankfully it’s probably not three years away).

Still, you can have fun without friends. Just look at ukulele players. And Daybreak does lessen loneliness by subtly guiding flow. For example, only outposts near held ones can be captured, so in my experience players tend to move through the map in a single direction like those angry green ghosts tearing through Minas Tirith in Return of the King. This clever coercion is a double-edged sword, because while it gives you an avenue of constant action, it also limits battles down certain channels. You’re told what to capture, when.

Vehicles get you off the beaten track. You know that old saying, 'you wait ages for a chopper in Battlefield then an idiot comes along and steals it and crashes it into the ground and you have to wait some more'? Brilliantly, that doesn't apply in Planetside 2. Vehicles belong to just one person - you. You’re not swarming to claim one-size-fit-all driving seats but given unfettered ownership of ATVs, troop transports, tanks and aircraft (after reaching the required rank, mind), able to customise camo, bolt on bumpers, tint windows, add hood ornaments, and change the horn jingle. And when you spawn it from the relevant terminal, its doors are locked to all but you.

It’s entirely possible you’ll be skipping through the lush green canyons of Amerish when a Sunderer rolls up on razor blade rims blaring a wolf howl for a horn, or crouching in shrubbery on the midnight desert plains of Indar when an ATV with red lights and a Canadian flag decal shines through the darkness like a glorious beacon. It's just one ultra customisable aspect of many. You can add optics, barrels, and rails to firearms, change your voice, create emblems, and reskin weapons. At one point I swear I got killed by Ghost Rider. It makes the game gloriously unpredictable if you’re not spending money, and impressively personalised if you are.

There's another saying, however: ain't nothing free. Obtaining anything other than what you begin with - generally a single gun in each of the six classes and a unique ability - costs. But then, Planetside 2's selling point has always been letting you decide how much. It's like a sushi bar: a table is free, but you have to pay for each little handmade dish on the menu.

And you get a good table. A session with the Infiltrator class had me scoping out a valley base and picking off foes from distance with two blasts of my 99SV sniper before pressing L1 to toggle invisibility and getting in fools' faces with the TX1 Repeater. The Engineer is less a lone wolf experience, and during a twilight raid on a control console I plant a deployable turret at a choke points and repair a Lightning tank under the moonlight as burning blue and green tracers rip through the sky. And I didn’t pay a penny for that. All classes are free, and all offer a richly different style of play.

There's been debate on what exactly constitutes 'paying to win', and to its credit Daybreak has found creative solutions in cosmetics. Where it gets tricky is purchasing better weapons, passive skills (improve hacking speed, for instance), and temporary experience boosts. Upgrading to a carbine with a faster firing rate is, however you split it, paying for better gear.

Thankfully the effect of these higher tier weapons in the heat of battle is subtle. That's because of Planetside 2's sheer scale. Often it's platoon vs. platoon, so you'll struggle to tell if the reload rate on on guy’s shotgun is 2.75 seconds instead of 2.78. I never felt I was being killed because I had worse gear.

While Planetside 2 approaches visual parity with the PC version (approximate to the PC’s mid-to-high settings), I experienced a few technical hitches. The game stutters through the map screens and crashed for me here on several occasions, and for about 40 minutes a giant ‘+2181’ appeared in the centre of my screen like the numbers from Lost for some reason.

Sustained battles across multiple continents might leave you pining for a more focused shooter, but Planetside 2’s sprawling style makes it unlike any other PS4 shooter - whether you pay for it or not.

Epic multiplayer warfare at the starting price of absolutely nothing. Though battles often feel a little too big, there’s nothing quite like it on PS4.