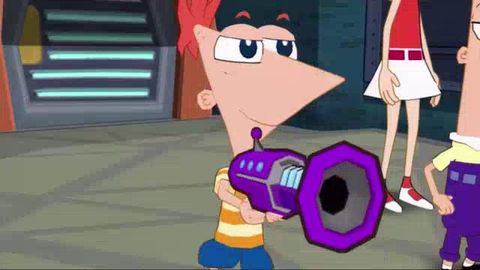 If you’re over twelve years old and/or don’t eat crayons, you probably won't much care for Phineas and Ferb’s first console outing. If you have spawned small offspring, however, it might be a budget title worth picking up. See, in a world where children's shows are overflowing with bratty (wizard) divas, Phineas and Ferb embodies politeness and creativity.

The show’s premise (which we watched… for research) is about two brothers who want to invent something awesome each day of summer instead of sitting inside, eating pork rinds and watching the Disney Channel (which is in no way ironic). The problem is they’re just dumb kids and the only awesome thing they should be doing is mowing the lawn and fetching dad a brewski. When one of their many inventions goes awry, the kids and their misshapen heads are cast into a series of parallel dimensions.

In order to return home, the characters must equip bullet-less weapons like baseball blasters and soda squirters and ward off the monsters unique to each of the six stages. These stages range from a gelatin-infested home world, to balloon worlds, to a beautifully rendered, but ultimately ill-conceived, old-timey black and white level (a la Mickey's steamboat).

The game is intended for two players, or one player with four arms, but the computer will graciously take over for player 2 if you play solo. Whether you play with the standard dual-shock or Move controller, there are only a few kiddy gimmicks – like shaking the controller to free yourself from goo. Unfortunately, even in the levels perfectly designed for the Move controller, like the jetpacking and slide sequences, the game plays no differently.

Regardless of which controller you use, the game is never hard. The difficulty reflects the game’s intended audience – which is either “very young” or “very bad at videogames.” There are few challenges for a real gamer and your characters frequently point out the game’s obvious level design. Stand still too long and you’ll garner "hints" about what to do next, like "I bet if you jump into that gelatin wall we can swim through it." Furthermore, health is littered at every corner – which is weird because even if you die, you only need to shake your controller to come back to life.

While collecting hidden coins in the levels and mastering the game’s skee-ball and clawgame minigames will add an hour or so to gameplay, the game still maxes out at a breezy three hours. After using the minigame rewards to purchase the few playable characters there’s really no reason to go back - all that’s left are figurines and sound chips to make your Soda guns moo like cows.

Ultimately, whether you should buy this game or not really comes down to whether you’re buying it for a twelve year old or yourself. The game is so short the included four unreleased television episodes last nearly as long as the campaign, and the humor is devoid of any Shrek-style double entendres to keep adults entertained. We can’t stress enough that this game is perfect for a kid, but that’s about all it’s perfect for.