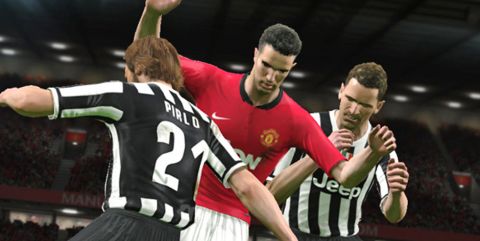 In recent years, the ‘Big Two’ of the football sim world has been starting to feel like the ‘Big One’. FIFA’s got the licenses, the presentation, the sales and--these days--the gameplay to back it all up. But this new PES, running on Konami’s new Fox Engine, feels more ‘like football’ when compared to FIFA. And that’s still something worth shouting about.

The key is in the control. Sure, there’s an equivalent to every skill move here in EA’s game, but the trickery and bread-and-butter possession play in PES feels like you’re really controlling the ball. The twin-stick trick mechanic is the most intuitive solutions yet--drag one stick for the feint, the other for where you want the ball to actually end up going. Add in some shoulder button nudges and you can hook the ball up onto your chest before scampering away. Pulling off the move you intended and leaving a defender for dead feels very special.

There’s a wonderfully solid feel to the players’ bodies in PES 2014. A running player can take the ball on their chest and keep it up off the ground without breaking stride. Tackles appear to be based entirely on the physicality of the the players’ legs and bodies on the ball, resulting in both scrappy challenges and perfectly timed sliding hooks to scoop possession off an attacker’s foot as they shape up for a shot.

However, the possession enhancements are not all praiseworthy. Sometimes, a successful skill move will open a defense right up, only for the defenders to freeze. In regular play, they would simply step in and nick the ball, so it looks very strange when they stand off it for no clear reason.

Likewise, actual pass distribution is often alarmingly haphazard, at least on default settings. What you expect to be a simple pass to a nearby teammate is often misunderstood by the game, which decides instead to pass to a different player. Said player is invariably close-marked, so the ball is intercepted by the opposition. Thankfully, there is a slider bar in the options that lets you choose anywhere between full manual passing (very hard) and straight-to-feet snap passing which helps somewhat.

The game is noticeably slower-paced than PES games of old, but the ‘game speed’ slider also returns, letting you have everyone zip around like they did on PS2 (and like they did in old silent movies), or treacle-wade through a super-slow version of football that makes every touch a controllable and deliberate event.

However, for all these sliders and toggle options, there’s one feature that can’t be switched off and that’s the one that’s caused consternation from fans for over a decade now. In PES 2014, the ‘momentum meter’ has a name: ‘Heart’. And boy, does it ever affect how each game plays out.

The official explanation is that Heart is how much the crowd’s enthusiasm is helping each player’s confidence. You hear them, too--pull off a skill move and a cheer goes up. How much this is warming each player is denoted by a little red glow on their icon in the team sheet. Aww. Their confidence is not only affected by their actions, but can also affect how the rest of the team is playing. That means a team can suddenly have worry start to creep in… and then their heads are gone. At that point, it doesn’t really matter what you ask your players to do. They’ll struggle with even the simplest pass and goalkeepers will flap at easy saves, conceding corners or even ludicrous goals.

It’s such a shame, because when the game feels like it’s working properly, it’s the finest representation of the sport yet seen on a console. Games morph organically through periods of scrappy throw-ins and free kicks, through to tight possession play and suddenly into frantic periods of all-out attack. And every now and then, you see moments of outstanding beauty that only clichés can describe. It's like poetry. It’s not as flashy as FIFA’s presentation, but still amazing.

What isn’t so amazing is the goalkeeper AI, which has a tendency to palm acute-angled shots straight into the goal instead of around the post. For anyone who thinks they could do better, PES 2014 lets you forge an entire career as a goalkeeper. You can still tell your teammates when to pass and when to shoot, so it’s sort of like playing the game... but the moments of 1:1 action are sparse. It’s not a great mode, although the regular outfielder version of Be A Pro still has its charms, especially when you can make a really convincing version of yourself in the create-a-player suite.

Master League returns and offers the choice of either taking on an existing team of players or setting up your own squad from a roster of original players. It doesn’t feel quite as engaging when you don’t recognise anyone in your Barcelona team, but the prospect of turning a bunch of nobodies into a championship-winning side is one that some might prefer over the more predictable, authentic option.

FIFA still has the clear edge over PES in the graphical department, despite PES 2014 running on Konami’s new Fox Engine. It also doesn’t help that some player likenesses are great but some are really rather poor. Ryan Giggs is a fine example. Strange when you’re asked to choose not only your favourite team but also your favourite player. Seeing a misshapen in-game model of your favourite player emblazoned across the main menu is horrifying.

The moments of fluid football where you feel completely at one with the game are better than FIFA. But all the strides forward in ball control are undone by the game seemingly doing everything it can to take true control away from you, leaving you with the feeling that PES 2014 is more about simulating football than it is about you playing it.