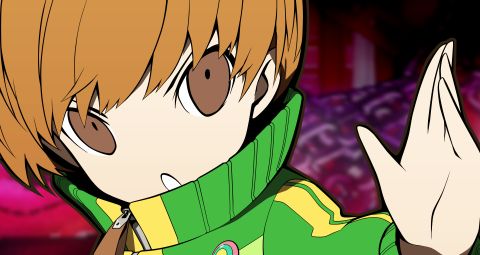 Persona Q: Shadow of the Labyrinth is a sugary sweet confection laced with the familiar darkness of the Shin Megami Tensei series, drizzled with the delights of first-person dungeon exploration. It's fanservice at its best; an amalgam of silly character interaction mashed up with hours of grinding and loot collecting, with a cast that play off each other exceptionally well. It's nothing at all like the more stoic iterations series fans are used to, and yet it’s warm and familiar; an adventure you'll absolutely want to embark on. That is, if you can handle an abundance of chibi-fied anime giddiness along the way.

This spinoff unites the cast of Persona 3 and Persona 4 to investigate a bizarre phenomenon surrounding the Velvet Room, the multidimensional meeting area in which the protagonists of both games conduct business related to Personas (the beings summoned by the heroes). After it has some sort of "malfunction", both teams find themselves smack dab in the middle of an enemy-infested Yasogami High School, the setting of Persona 4, as labyrinths open up that both teams of students head into in order to figure out what's going on.

You'll spend most of your time delving into said labyrinths, exploring revolving dungeon layouts and different types of terrain as you fight off hordes of Shadows, or the enemies prevalent in the previous Persona games. The introduction of the first-person viewpoint forces you to keep abreast of your surroundings even more so than usual, because it’s devoid of even the most rudimentary of game aids - like a map, for instance. You’ve got to make your own.

Tile by tile you explore each area as you go along, marking a mostly empty map on the second screen. Here, you can denote dead ends with any color or symbol you'd like from the tools available to you, mark areas you've already been before, or even make a note to yourself where specific treasure chests are that you'll need to come back to later. Creating your own map as you go can be a difficult and heady task when all you want to do is uncover new areas, and it was (at least for me) an instant turnoff before I got the hang of it.

The art style in Persona Q greatly differs from the much more realistic vibe of the characters from their original games. Instead, the characters have received a ‘super-deformed’ makeover with adorable expressions, ‘chibi-fied’ bodies and limbs, and a much less serious feel to their roles overall. The cuteness of the core cast of characters offsets what can be a very difficult endeavor, so the visuals are definitely welcome.

As you and your five-person party of characters explore, you'll fall victim to random assaults by Shadows, but there are also FOEs (Field-On Enemies) to contend with as well. They're giant versions of run-of-the-mill enemies that wander the map and put up more of a challenge than usual. I equated the larger FOE patrolling the first dungeon to a simple larger Shadow I had eliminated time and time again in other Persona titles, and quickly found that I was levels away from my being able to conquer it.

That's why its combat system finds you doing whatever you can to enact "Boost" status. It's all about finding weaknesses and exploiting them so you can remain one step ahead. Once reached your characters will be more apt to do extra damage and receive an extra action. Manipulating an enemy weakness, for instance casting your Zio (lightning spell) or Bufu (ice spell) when the enemy is clearly weak to elemental damage, will Boost you as easy as pie. You’ll attack first next turn and be granted a single spell that won't cost any MP.

Though if you think that makes empowerment sound easy, don’t. Some party members, like quiet Fuuka and gorgeous idol Rise aren’t exactly helpful in certain situations. For instance, they're hardly (if ever) spot-on when it comes to analyzing enemy weaknesses, and they do little to advise you as to where you're going in the labyrinth beyond vague statements. But thankfully, as a trade-off, they do pull off some useful skills, such as healing your party when you're in need.

Your Personas are what make things interesting, with each character given a "Sub-Persona" that allows them to otherwise use abilities they may not have had access to using their own assigned Persona. Unfortunately, given the nature of most of the Shadows in the labyrinths, you'll not really need to rely on special abilities as often as you might think, with boss fights and new enemies posing the biggest threat. You can breeze right on through everything else, which makes Persona fusion - a must to obtain more powerful and varied Personas, and a staple of the previous games - feel almost like an afterthought.

There are myriad of other frustrations as well, such as the repetitive nature of the labyrinths themselves, which you'll find reusing the same assets and layouts. While the overarching themes of each dungeon change, the decorations hardly ever feel truly unique, so while there's plenty to do within them, there's not much to see. For a game that forces you to explore every nook and cranny, the dungeons could feature more interesting decor.

Additionally, Persona Q is devoid of the deeper character interactions that permeated the original games. Instead, it's jam-packed with pandering to series fans and bizarre personality quirks such as Elizabeth of the Velvet Room's propensity to force her brother Theodore to wear a frilly apron. While I giggled at several other similar moments, it didn't have the same pull as the more macabre subject matter of Persona 3 or 4.

Persona Q: Shadow of the Labyrinth is airy in ways that work, but hardcore fans may find themselves turned off by its nonchalant nature. It’s rife with nostalgic moments for series veterans, but it's not the satisfying interim entry that hardcore fans need to tide them over until Persona 5. What it is, however, is a delightful romp that revels in its lightheartedness and casts familiar characters in a different light. It's got depth, for sure, but is it deep? Hardly.