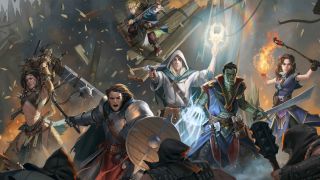 If crowdfunding success stories have shown us anything, it's that there's still plenty of demand for old-school, isometric RPGs. Modern classics like Divinity: Original Sin, Wasteland 2, and Torment: Tides of Numenera all found their footing via hugely popular Kickstarters - and now Pathfinder: Kingmaker is joining the ranks of old-school PC adventures with contemporary designs. I got the chance to sit down with creative director Alexander Mishulin of Owlcat Games and narrative director Chris Avellone - a living legend of the genre - to see how Pathfinder: Kingmaker will please fans of the tabletop game while pulling in roleplaying newcomers.

It's difficult to get a complete sense of such a massive RPG in a mere hour, considering Pathfinder: Kingmaker's main campaign is estimated at around 40 hours long, and it'll take you double that to see everything the world has to offer. If you're not familiar with Pathfinder, it's a tabletop game from Paizo Publishing that uses Dungeons & Dragons' 3.5 edition ruleset as a base, with plenty of Adventure Paths to conquer. This digital take on Pathfinder: Kingmaker (one of the aforementioned Adventure Paths) has you fulfilling two roles: courageous hero leading a party as you brave the vast Stolen Lands, and ruler of a fledgling kingdom that you'll slowly build up over the course of five in-game years.

Having never played the original tabletop game myself, I asked Mishulin to explain what makes it stand out from other fantasy RPGs. "It's a world filled with very interesting subsettings that somehow connect together," he says. "It allows you to transition from being in standard medieval fantasy, to go to France in the Renaissance period, then go fight some mummies, then explore a spaceship. It's very crazy. The [video] game is focused on one Adventure Path that's more contained and just references some of this stuff - but when you're playing on the table, you can experience a lot of different things in one fantasy."

Even in my short time with the Kingmaker demo, it was immediately clear that it'll please anyone who's enjoying the recent Western RPG renaissance. The isometric view gives you a good sense of the action, as you position your custom hero and AI companions during the real-time combat, which can be paused at any time so you can plot out your preferred tactics. Dice rolls happen behind the scenes to determine your prowess in a fight, or when performing actions in the world like defusing traps (something I failed to do during one attempt, resulting in a mist of poison gas enveloping my poor party). It instantly evokes classic PC RPGs like Baldur's Gate, Fallout 2, and Planescape: Torment - all of which just so happen to be part of Avellone's prolific body of narrative and design work.

Avellone also worked on more recent hits like Pillars of Eternity, Into the Breach, and Arkane Studios' Prey, along with the upcoming Dying Light 2 - but Pathfinder: Kingmaker presented a chance to expand the story of a tabletop game he knows and loves. "We did want to include some of the classic Pathfinder characters, so Amiri can actually join your party, and you can have a storyline quest arc with her," he says. "We didn't have to do any of that, but we thought it'd be a cool way to integrate both the pen-and-paper version and the computer game version. Players familiar with Pathfinder can say 'Oh wow, we recognize Amiri from the books! Now we can journey with her in the party.'"

But this isn't a one-to-one recreation of the original Adventure Path, and Kingmaker explores plenty that goes beyond the book. "Any changes or alterations - 'Hey, we'd like to add this, or we're thinking about taking this character in this direction' - we just talked it over with Paizo, and they were pretty cool," says Avellone. "I think it just helped knowing a lot about Pathfinder in the first place, because that meant that a lot of our suggestions [garnered a response like] 'Oh, we see where you're going with that, and because you understand the universe, that proposal makes a lot of sense to us.'" If you're a Pathfinder veteran, you'll be pleased to know that Kingmaker includes extensive character customization (complete with classic alignment matrix of Lawful/Neutral/Chaotic and Good/Neutral/Evil), 145 locations, 100 monster types, and all the races from the core game (plus the Aasimar for good measure).

In one small sidequest, I attempted to resolve a dispute between a group of cantankerous kobolds and curmudgeonly mites. I tried and failed to solve the conflict peacefully, but you can choose a side, stay out of the feud entirely, or investigate further to find out what started the hostilities. All the while, your companions (with 11 available in all) chime in with suggestions that you can heed or ignore. "Companions really like to insert themselves into dialogue and provide their own opinion on what's happening," says Mishulin. As you grow more and more attached to your companions, you can adjust the incredibly detailed difficulty settings to determine how much peril they might be in. There's the option to have fallen companions pop back up after combat, or those who want a challenge can set it so that they're sent back to heal at home base if they're defeated a second time.

Speaking of home base, your kingdom in Kingmaker is as much a part of your roleplaying as the whole 'explore dungeons, kill monsters, and chat with NPCs' part. You start as the leader of a small barony, but over time will make choices that expand your territory until you're calling the shots in an expansive empire. You can build structures that'll affect your kingdom's stats, or just go into automation mode if you're not a fan of city management and just want to focus on the story. No matter how you choose to rule your domain, there will be constant threats from the outside world - like invading hordes of fireproof trolls, for instance - that you'll need to deal with, lest your 'Unrest' meter tip from stable, to riots, to crumbling. "If you go beyond crumbling, [those forces] will destroy your kingdom, and the story will be over - because your story is really tied to the story of the kingdom," explains Mishulin. "Some [threats] are more time-pressing, some less, but you're always get several warnings, like 'In two months, they will swarm us - do something, please!'"

Executive decisions regarding politics and infrastructure are also a big part of how you rule. You'll have the chance to negotiate with other baronies or vie for territory in the Stolen Lands, all of which come with tradeoffs for economic stability or diplomatic relations. None of it is colored by explicit morality: "There is no good or bad... it's up to you to decide what is really needed at the moment," says Mishulin.

You'll also have to make some hard calls along the way. "You can't do everything by yourself," says Avellone. "Where do you deploy the guards? Do you secure trade routes, or villages? Those are choices that you make, and then the results of those have different consequences for the economy, for unrest... It's not all just 'I'm going to go find the main dungeon and kill them all.' There are other things you have to manage as well."

For anyone who enjoys roleplaying as a virtuous champion or malicious evildoer, benevolent ruler or militaristic tyrant, Pathfinder: Kingmaker should provide dozens of hours full of adventure and consequential decision-making. I'm mainly excited to just take my sweet time reading all the enchanting dialogue as I chat with my companions, and trying to make everyone in my kingdom like me. Your personal story can begin when Pathfinder: Kingmaker launches for PC on September 25.

For more great games coming later this year, check out the best new games of 2018.