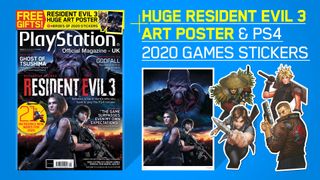 The new issue of Official PlayStation Magazine is out now and we make some startling discoveries about the remake of Resident Evil 3. Producer Peter Fabiano tells us all about what it takes to bring this classic survival horror to PS4, and confirms the multiple endings of the original game won't be in the remake.

Fans will also remember Resident Evil 3 broke the mould by offering choices that would affect immediate routes through the game at key moments throughout the story, leading to different endings. So will the remake return with a mix of endings? "No," confirms Fabiano to us this issue.

If you want to read more, you'll have to pick up the new issue of Official PlayStation Magazine #171 on sale now, in which we cover more of Resident Evil 3 in our massive eight-page cover feature.

There was a surprise this issue as Gearbox revealed Godfall, PS5's first confirmed game. We saw it in action and the mix of Destiny and Dark Souls, piped through PS5's glossy ray-traced tech visuals and powered by SSD looks stunning. So good we just let the images do the talking!

• Save up to 51% when you subscribe to Official PlayStation Magazine.

Matt Nava sat and his team sat down with us this issue to share new details and images of The Pathless, his spiritual follow-up to ABZU that has us exploring a mysterious island with an eagle companion.

In our exclusive look at the game Nava reveals how the new bow and arrow combat works. Hold down R2 and The Hunter pulls back the bow string on the target. "The longer you hold it, the more that thing charges up until it’s 100%. And the amount that you charge it is the accuracy of the shot," says Nava. "But if you let go too early, then it’s going to be 25% accurate or you know 30% accurate and the arrow will fly off."

There's a risk/reward too, as you can pull off quick shots to get maximum accuracy early. "At exactly 50% we have a tiny window of 100% accuracy," says Nava. "You get a little extra boost when you do that type. So you can kind of wait for the more reliable shot, or you can go for these quicker ones, and just that simple mechanic makes it really fun to run, shoot these things, and keep your speed up because that change from making it so you focus on aiming to the timing mechanic allows you to keep your focus on moving the character."

• Are you a PS Plus subscriber? Then get our 3 issue for £1 offer here!

Out early February, Zombie Army 4: Dead War could be the best antidote to those new year blues. Having faced-off against a horde of the undead and a zombie tank we enjoyed our time with the game. Editor Ian Dean writes this issue: "Zombie Army 4 is playing by its own rules, and its brand of schlocky arcade horror never fails to raise a smile."

While we await the release of Final Fantasy VII Remake, the developers shared plenty of new details with us this issue. We know this is part of one of a larger series of games under the FFVII Remake umbrella, but the second one is already in the works…

"We’ve already begun working on the next one as well, but I’m confident that playing through this title will expand your expectations just like the world that extends beyond Midgar," shares Tetsuya Nomura, the game’s director and concept designer in OPM#171.

Pick up the magazine in stores now to discover what else the FFVII Remake team has to say.

For more unrivalled developer access to the hottest PS4 and PS VR games, why not subscribe to Official PlayStation Magazine? You'll save on the cover price and have your copy delivered to your door (or device) each month, complete with exclusive subscriber covers – such as this month's alternative Resident Evil 3 design featuring Nemesis.