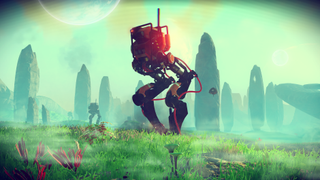 What you actually do in No Man’s Sky is still a bit of a mystery - there's something about trying to reach the centre of the universe and obviously all that exploring, trading and fighting, but the rest? That’s a bit muddy.

That might be for good reason with Hello Game’s Sean Murray explaining in this video that the game has no story. Instead it’s all about experiencing the world.

“We shouldn’t have a story but we should have a lore,” he explains, referencing the wider world and how that creates a narrative you inhabit. “The things that you see there are there for a reason. The buildings are there because a certain race built them and they look like that race has built them. If you talk to aliens in the game you’ll get touches of that. And that’s lore to me, it’s world building”.

James Swallow, who wrote a comic that accompanies the game, puts it more succinctly “You, as a player, can come in and build your own narrative. At the end of your play of No Man’s Sky you will have told a story that will be unique to you”.