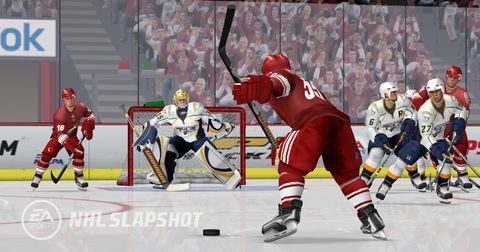 We love it when developers take risks, especially calculated ones. NHL Slapshot is the perfect example; a new franchise on with a gimmicky controller (risk!) built on a rock-solid engine that guarantees a smooth experience (calculated!). What’s more, Slapshot embraces its existence on the Wii with a playful attitude that’s a welcome change from your traditional sports sim. Who knows – it may even get the kids into hockey. Stranger things have happened.

Yes, NHL Slapshot comes with its own mini hockey stick controller and – despite the cheery producer instruction video on the disc – is a minor pain to put together. If you happen to own Motion Plus controllers, be sure to put them in a safe place after you dismantle ‘em to shove the Nunchuk and Remote into the stick (Motion Plus is not supported with the peripheral). Once together, though, it works pretty well; you rare back on the stick to take slapshots, flick it forward for wristers, and cross-check the air in front of you to lay the wood on your opponent. It may not be extremely comfortable, but we applaud the effort.

While you may be tempted to jump right into a season, the real charm of Slapshot lies in the Pee Wee to Pro mode. It’s the best way to learn the controls, and for our money it’s more fun than the NHL games. This extension of Be A Pro starts you off as a kid in Pee Wee 3-on-3 games, putting you on a path from backyard rink hockey to NHL arenas. While pond hockey has been a staple of NHL games for years, we had more fun playing it in Slapshot simply because it meant something this time – gaining valuable experience points to increase our player’s attributes.

To be sure, the action in Slapshot isn’t exactly hyper-realistic. Our energetic little Pee Wee dude had no trouble knocking down much bigger kids, just like NHL All Star (but decidedly small) Zach Parise took out the gargantuan Zdeno Chara with ease. Even so, it didn’t bother us at all – particularly because the comic book-style graphics that pop up when you smash into an opponent illustrate that Slapshot is more about arcadey fun than serious simulation.

Some may complain about a lack of modes or online play (other than roster downloads), but we won’t. After all, very few serious puckheads would look to the Wii for a multi-year franchise or online leagues. Between the options for an NHL Season, Pee Wee to Pro, and local multiplayer, Slapshot has plenty of ways for friends and family to have fun on the ice.

We didn’t expect a lot from NHL Slapshot, which may explain our delight at what we found. With the right audience, it’s a superb hockey game with its own unique charm and “this is all about having fun” vibe. There ain’t nothing wrong with that.