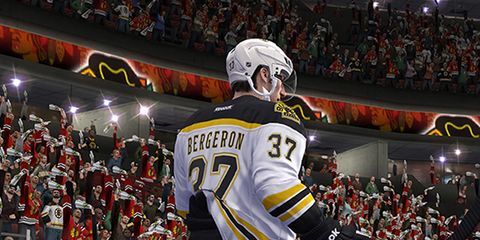 The NHL has seen some drastic changes since the end of the lockout. A conference re-alignment sees the Red Wings head east to resume old rivalries, the Dallas Stars have a new look, and Sidney Crosby is down eight or nine teeth. And of course, the Flyers have finally sorted out their goaltending probl...well okay, so maybe some things are destined never to change. But despite all this real-world upheaval, this year's video game installment is a safe, stay-at-home kind of update. This was to be expected to some degree; NHL 13 was something of a mini-revolution for the series, introducing a physics-based skating system that changed the flow of play significantly, and NHL 14 is concerned with refining than redefining. The good news is that it meets the cautious goals it sets for itself.

One of the main focal points is readdressing the imbalance between offense and defense. Effective defending in NHL 13 required discipline; since forwards on the rush had momentum on their side it was a cakewalk for them to breeze past disorganized defenses. Instead of hunting down attackers, the smart option was to concentrate on positioning yourself in-between the forward and the net to shut down their scoring opportunities. This is still the case in NHL 14, but quicker turning angles and faster lateral skating gives more room for error, and quicker pivots make it more viable to backskate with the puck and calmly play your way out of trouble.

The other method of empowering the defense employs less subtlety. The new Collision Physics (everything has to have a silly name in EA's world) feature makes it easier to serve up huge, crunching, open ice body checks. It's a change that comes at the expense of realism (big hits are now so common that you'll wonder if you've blundered into some kind of Dion Phaneuf cloning experiment), but it makes for a more enjoyable, more aggressive game. It also helps defenders deal with breakaways more effectively, cutting down on NHL 13's almost perverse number of short-handed goals.

NHL 13 nailed the offensive side of the game so NHL 14 largely leaves it alone, aside from the addition of a 'one-touch' deke option which we're not sure benefits the game in any way. The idea is that a tap of LB sees your player automatically bust out one of his tricks--it's context sensitive, so the one he performs is dependent on the distance between yourself and the other player and your skating speed. It comes in handy as a nuclear option if you're about to get body checked into Row Z, but we found the traditional manual deking system more reliable and more satisfying to pull off, too.

The single-player modes continue to stagnate, both in terms of structure and presentation. It's Be A Pro's turn to get some token improvements this year. Now rebranded 'Live The Life', it comes with the promise that you'll be able to live the life of a professional hockey player off the ice as much as you do on it--which sounds fantastic if you've ever fantasised about driving a boat punch-drunk, or smacking a taxi driver around. In-game however this manifests as a succession of multiple choice questions. You answer media questions in a variety of droll ways, or choose how to react to training day incidents, and your choices will affect either your standing with management, teammates and fans, or your stats in some way. (Partying, for example, will improve team chemistry but might leave you feeling a bit baggy-eyed during your next game).

It's an amusing twist on the Be A Pro formula which fleshes your own personal story out nicely and gives you the impression of added agency, but its eagerness to show its workings with immersion-breaking bar charts and numbers does require you to suspend your belief at times. Talking of suspension of belief, how good you are at it will likely determine how much mileage you squeeze from the new NHL 94 Anniversary Mode.

Taken at face value it's quite a nifty extra. Designed to replicate the oft-romantisied more carefree hockey of the series' earlier entries, Anniversary Mode turns off the rules and ramps up the speed, creating a pacier and more accessible brand of end-to-end hockey, where one-timers and slapshots from the blueline rule supreme.

It's a cracking addition which enables casual fans to join in the fun without having to make them sit through a 30-slide PowerPoint presentation first. It also serves as a refreshing counterpunch to the main course, which can get bogged down in its quest for realism. As a nostalgia trip for the hardcore fan, however it can't help but feel a little half-assed. It's full of neat visual touches--the blue ice, the retro player markers, the way NHL 94 footage plays on the big screens--and the feel is more-or-less right, but oversights come thick and fast. We found the presentation in particular to be disappointing--the HUD and pre-match sweeps have been cut and pasted from the main game rather than receiving a retro makeover, making it look and feel exactly like what it is – an NHL 14 reskin with the gameplay markers cranked to 'insane'.

The NHL series remains one of best sports series on the market and is heartily recommend to any newcomer with a love of hockey--but the sport's unique flow and fussy regulations mean that its appeal isn't as universal or instantaneous as, say, its sister FIFA series. However, we'd urge NHL 13 owners to think twice before laying their money on this one. NHL 14 is typical of the kind of annual updates you tend to get at this point in a console's life cycle. It's a confident entry in the series that makes tweaks in all the right places, but you feel that they're holding back--that they're saving their 1st rounders for a next-gen debut.