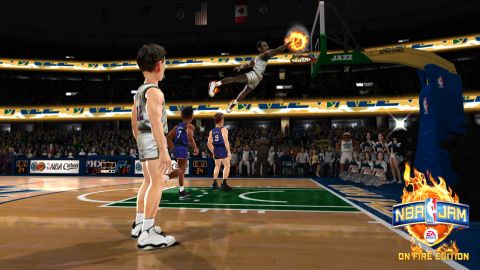 Larry Bird is mocking us. He’s just taken a seat at the three-point line and thrown a fiery basketball – underhanded - through the net, padding the insurmountable lead he and Kevin McHale have established. “Ha!” laughs our teammate as the hapless New Jersey Nets fail miserably at defense. “NBA Jam is the only game where you can act like a jerk and it’s OK!” While we don’t necessarily appreciate the behavior, it’s certainly a true statement.

As a quasi-sequel to last year’s full-priced NBA Jam revival, On Fire Edition is a bit of a curiosity. Everything we love about the game is in full effect, from the beautifully stylish visuals to the over-the-top dunks and defense and – of course – Tim Kiktzrow’s wonderfully bombastic play-by-play. Hordes of players, mascots, and teams are unlockable, and there are compelling online modes for one to four players. While some of the features of last year’s game are no longer present (like the Remix campaign), the new online options are arguably better. So why the steep drop in price from $50 to $15, distributed as a download-only package? What’s the catch? Turns out there is none. NBA Jam On Fire Edition is just as fun, fast, and (occasionally) infuriating as ever.

The Road Trip mode sends you through different divisions of the NBA with challenges unique to the team, and you can do this on your own or with a buddy. Early games are simple enough, as we were abusing teams by throwing down alley-oops at will. Once we moved past the initial stages into the second- and third-tier games, though, those tactics failed miserably. Sometimes we faced teams loaded with legendary talent, which necessitated multiple attempts. Other times the game would be played very differently, such as variants where dunks would be worth more than three-pointers – and we’d be playing against a team of Dr. J and Darryl Dawkins. That’s a ferocious combo in the paint.

Once all three levels (bronze, silver and gold) are beaten, you’re then presented with Platinum challenges featuring Jambots. That’s where we ran into the most trouble. Whether or not the game simply starts to “cheat” or the individual players are that much better, the odds get stacked against you. Open shots magically get blocked, dunks mysteriously clank to the hardwood, and well-defended opponents nail three pointers. Luckily, you can tackle it with a friend locally or online, but it’s a very different experience. When playing alone, you get accustomed to calling for shoves on defense and initiating devastating alley-oops with simple taps on the shoulder button. You switch players with ease, depending on who you want to control.

When playing with a friend, things will fall apart unless you’re communicating constantly. We allowed more open three pointers than we’d like to admit when our teammate would attempt to shove the same defender we were covering, and miss alley-oop attempts on a regular basis until we screamed “Going for it!” beforehand. Conversely, when you establish a rhythm and familiarity with your teammate, Jam is a beautiful experience – and anyone can be beaten regardless of the team.

Of course, it wouldn’t be Jam without player-versus-player options, and there’s plenty of that. Whether you’re taking on someone locally or online in the Arena, it remains our favorite way to play the game. NBA Jam is at its best when it’s you versus one other person, each of you desperately trying to get someone On Fire to rain down unstoppable 50-foot helicopter dunks or 30-foot three pointers. In addition to the traditional Fire feature (when a single player gets three consecutive buckets), there’s also Team Fire when you get three straight alley-oops. Both players enjoy the effects, and it lasts for a little while even if you give up points. Just don’t expect to nail many alley-oops in advanced games. It ain’t happening!

No matter what mode you’re playing, you’ll gather in-game currency that will let you purchase all sorts of swag at the Jam Store. Whether you’re looking for long-lost players, mascots, oddball basketballs, or badge customizations, there are hundreds of items available. We’re still trying to figure out if it’s brilliant or evil that EA will let you spend 400 Microsoft Points to unlock everything the store has to offer. Considering the game costs 1200 points, and the most common tier of points you can buy is 1600, it’s almost too much of a coincidence. Besides, what’s the point of playing the game if you buy everything off the bat?

If you’ve ever played NBA Jam – and really, who hasn’t at some point – you won’t have a problem jumping right in. The controls are simple and even the “advanced” moves can be pulled off without much trouble. The action is so fast, though, that it’s easy to lose control of your player and wind up far past the action. Defense, in particular, is tough to get right. Getting the timing down on shoves and blocks is definitely a skill – and when you’ve got that down pat, you’re virtually unstoppable.

We didn’t have any online connection problems in our games, but it does seem to take forever to get through the loading screen. The sub-menu screens are pretty baffling, too, which isn’t helped by microscopic text on them. Ultimately, our biggest problem was fatigue; after 90 minutes or so, no matter what kind of match we were in, the games began to grow stale. Luckily, each game is pretty quick – less than 15 minutes most of the time – so you can get a lot accomplished in one- or two-hour blocks.

It’s a shame that Jam On Fire has been released right now. Thanks to the NBA lockout, there’s a bunch of negative pro basketball buzz in the sports world these days. Meanwhile, NBA 2K12 came out on the same day and is, in a word, incredible. We have a feeling On Fire will get lost in the shuffle, which is a bummer. Between the price, the modes, and the online play, it’s a gem.