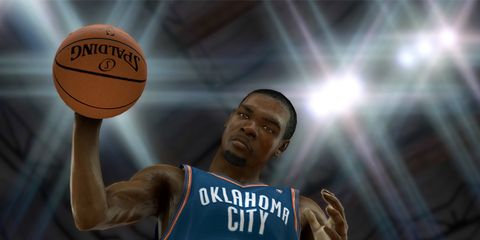 It may seem hard to believe now, but a few years ago the NBA 2K series was known as just another good basketball franchise. Then came NBA 2K11 and the explosive Jordan Challenge, followed by NBA 2K12 and the amazing NBA’s Greatest mode. Both games took the sports gaming world by storm, which put the Visual Concepts team in an enviable position. But how do you top absolute greatness? The answer is, at least this year, you don’t. While NBA 2K13 is another stellar effort with a ton of fun stuff to do, it’s lost a bit of its soul along the way.

On the court, NBA 2K13 plays better than ever, which is no small feat. Two of the causes of frustration last season--inaccurate passing and fast break execution--have been significantly improved. Lazy passes will still be intercepted, but a higher percentage of “safe” outlets will make their way to their intended targets. You’ll finish on lots more fast breaks too, as the speed of offensive players on the run feels much more balanced with that of trailing defenders. Pushing the ball up the floor off of rebounds is a lot of fun now, which translates into a better, more free-flowing experience.

The biggest modification this season, though, is the implementation of a new set of controls. The bulk of the dribbling is now on the right stick, unless you’re holding the left trigger, which then turns it into the Shot Stick. Coupled with hundreds of combinations of triggers, button presses, and stick swirls, you’ve got countless options to manipulate your players.These controls work quite beautifully - if you can muster the strength to learn them. Unless (or until) you throw yourself into a ton of training, however, your success or failure will be based on luck.

That need is the elephant in the NBA 2K13 room: The control scheme is too daunting to people who just want to play a fun game of basketball. 2K’s controls have always been complex, but this year goes beyond being “deep” and well into the territory of brutally hard to lots of people who play sports games. All you have to do is take a look at the list of mechanics or try and complete the in-game tutorial; the amount of options is so vast that it’s virtually impossible to comprehend.

Don’t have the time to learn how to call plays from the hundreds of choices? Good luck guessing where your teammates will wind up. Can’t master the art of learning the multiple right-bumper pick-and-roll options? Have fun trying to set screens for open shots. And that’s just for starters. The myriad things you can do with your individual players as well as your overall team has gone from being intimidating to almost incomprehensible, unless you’re willing to invest 20 or more hours studying them. That’s a tall order.

A celebrated addition this year is the inclusion of the 1992 Dream Team and the 2012 Team USA Olympic squad. While it’s awesome to have these two clubs added to the impressive list of historical teams, another piece of NBA 2K’s soul disappeared with the removal of the NBA’s Greatest mode and the Jordan Challenge. It would have been so much fun to run through those stunningly fun campaigns with the much-improved gameplay. In its place, a new online-only MyTEAM mode has been introduced, which was inevitable considering the success EA has had with its various Ultimate Teams. You gather cards of tiered packs to create, build, and lead your own team which, naturally, can be enhanced by spending some real-world cash as well as coins you earn in-game. Yes, MyTEAM has proven to be fun in limited playtime--but it’s too bad that the historical modes had to be sacrificed for its creation.

A chronic problem that has been dramatically improved this year is the online experience. Online games are running rather smoothly, and the updated commissioner controls for leagues produce of much less confusing situation. It’s heartening how much effort the 2K Sports team put into these modes.

NBA 2K13 is in many ways a tremendous achievement. The game’s fundamentals are superb, offering an on-court experience that is the best representation of real NBA basketball yet. Its sights and sounds are beautiful, from the splendid commentary to the Jay Z-influenced presentation, and the variety of basketball options are impressive both online and off. Yet, for the first time since it went from being a good basketball game to a cultural touchstone, it’s taken a step backwards. The controls have become far too complex for much of its audience, and there’s no one mode that captures your attention as much as the now-absent Jordan and Greatest challenges. It seems that after reaching the mountaintop, there really was no place to go but down--even just a little bit.