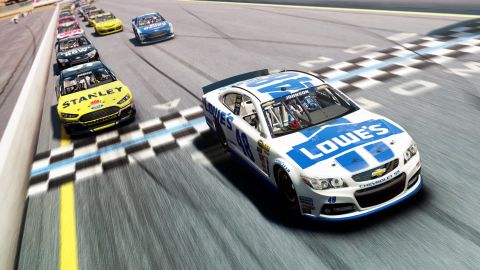 All it takes is a moment of impatience to ruin an entire race. For more than 20 laps I meticulously carved out my place in front of a voracious pack of the world’s best stock cars at the Texas Motor Speedway, fighting for position and trying desperately to maintain my racing lines through the turns. With the final laps ahead, my crew chief lets me know I have challengers on both sides, and instead of playing it safe and letting them pass, I try to hold the inside. Veering to the left a half-second too late, I get clipped from behind, creating a massive chain-reaction wreck. By the time the yellow flag is out and the mess is cleaned up, my position dips from 1st to 30th. Such is life on the NASCAR circuit.

While fans of the sport love a good wreck, the reality is that they're the best way to a lousy result. Nothing makes that more clear than NASCAR ’14.

Whether you're playing a career race, one of the nifty “jump in and race” NASCAR Highlights moments from seasons past, or simply a one-off tilt on the track of your choice, NASCAR ’14 rewards patience and technical prowess while punishing rash decisions and carelessness. You can manipulate the settings and drive like a maniac, but doing so utterly defeats the purpose. NASCAR ’14 shines brightest when the difficulty curve is somewhere close to realistic, making it a challenging experience from which you gain an appreciation for what the real drivers have to go through in preparation and execution. The slightest dip in concentration or momentary lapse in judgment will doom you to the back of the pack.

The heart and soul of NASCAR ’14 remains its Career mode, which has a few key improvements under the hood. Vehicles can be adjusted in a host of ways, including horsepower, suspension, and more, and there are plenty of other options to unlock as you progress. While tweaking these settings will delight gearheads, there isn't a lot of information at your disposal as to what their effects are; it’s up to you to get out on the track during practice laps to see what works and what doesn’t. That’s a prevalent theme in the career mode overall--with so many aspects to control, such as paint jobs, sponsorships, and cash management, there’s precious little context for some of the key decisions you need to make. You just need to figure it out.

Longtime fans may also be disappointed to learn that the career mode still contains no minor leagues or truck series as a stepping stone to the majors. That being said, with virtually every track and tons of real-world drivers available, it's easy to spend hours getting lost in the intricacies of the content that's here. Each track has its own nuances, and knowing the brake points and best lines to follow will make all the difference in qualifying. It’s incredibly difficult to take those same lines while in the midst of 40-odd racers, though. Unless you surge ahead of the rest or find a little breathing room in the middle of the pack, most of your focus during the actual race is concentrated on surviving. Trying to avoid smashing into the cars ahead of you while making sure you don’t get clipped from behind or the side trumps most of the technical mechanics you’d otherwise employ.

The smaller tracks like Martinsville and Bristol, for example, feel like a mix of pinball and bumper cars. With almost no room to move and an incredibly short oval, these can be the most frustrating of all. Each race is full of constant yellow flags, and you’ll never feel safe no matter what position you’re in. The larger tracks present opportunities to use some more traditional strategies, of course, and let you open the throttle quite a bit. Even at Talladega or Daytona, though, the slightest mistake will send you from the front of the pack to the back in an instant.

One key addition this season is Online Leagues, which tracks seasons with standings and statistics for the first time in the series. I wasn’t able to test these out prior to retail release, however, so be sure to check back in the future for an update on this feature's implementation. It’s also important to note that the just-adopted changes to the NASCAR Sprint Chase For The Cup are not present at launch but will be added in as a patch after; whether or not you’ll have the option to choose to play with the old rules or the new ones remains to be seen.

You can tell that the development team behind NASCAR ’14 has gotten completely to grips with the franchise. As the fourth release, it controls better and feels more polished right from the green flag. Aficionados will appreciate the depth of options while newcomers will be able to easily jump in and race if they make some simple adjustments to the difficulty. What’s more, it arrives right on time for the Daytona 500 and the start of the 2014 NASCAR season. The timing couldn’t be better.