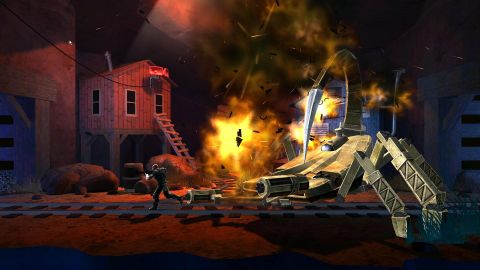 Once again, Matt’s running through a series of videogame worlds cribbed from other games, hunting for a comedy evil Russian. You’ll visit parodies of BioShock, Mario, Mirror’s Edge and, er, Team Fortress 2. It’s an odd choice of titles – there’s no real comedy value in leaping through an area that looks a bit like Rapture, nor anything remotely clever about the parody.

A greater problem is that the run-and-gun shooting, while pleasant enough, is miserably unambitious. There isn’t much here that Contra or Metal Slug haven’t been doing and perfecting for years, aside from a few decent bosses.