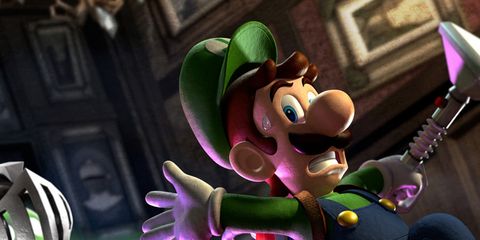 Against the terrified plumber’s wishes, Luigi’s Mansion: Dark Moon marks the sidekick’s return to ghostbusting after a long break. By skillfully combining humor and strong gameplay while also ably reimagining the series for portables, Luigi’s newest thriller is one of the strongest 3DS games to date.

The story begins with Luigi once again getting pressed into ghost-removal service by the wacky Professor E. Gadd. Luigi is on a quest to repair the ghost-calming artifact the Dark Moon, and he and his modified vacuum (a.k.a. the Poltergust 5000) need to clean up five sizable mansions to find it. The subsequent storyline is largely forgettable, but it’s a great excuse to milk as many laughs out of Luigi’s terror as possible. His overblown reactions are consistently worth a chuckle. However, it's the subtler moments, like when he tries to calm his nerves by humming along to the game's background music, that deliver the biggest laughs.

The storytelling might be basic, but Dark Moon’s diverse world makes up for that. From the first mansion onward, the stages have the feel of a Disney-owned Haunted House, full of scares for all ages. The five manors' shadowy rooms are packed with unique objects--such as record players or ovens--that will often solve puzzles, but you’ll be inspired to interact with everything you see even if they don’t serve an obvious purpose. Touching every item in the room will sometimes reveal an optional miniboss, extra cash for powerful Poltergust upgrades, or just a comedic moment you wouldn’t have seen otherwise.The game is very giving when it comes to rewarding curiosity.

When you come across the plentiful ghosts lurking in every corner, the process of freezing one of the little jerks with your flashlight is straightforward. That said, Luigi's Mansion keeps this process fun and engaging throughout the course of the game. No matter the size of the ghost, there’s a surprising nuance to the push and pull mechanic of sucking up a specter in the Poltergust. Get the timing right and you can catch three ghosts instead of one in a single attack, or expertly dodge damaging blows mid-capture. The action stays engaging for most boss battles too, though a couple get tripped up in tedious repetition.

And the franchise’s established gameplay translates pretty well from consoles to portable. Rather than Luigi's Mansion's one huge building, Dark Moon parcels out the campaign into five digestible chapters, with smaller objectives sprinkled along the way. Treating the campaign like this is a smart adjustment that makes Dark Moon pick up and play while maintaining a much its predecessor’s scope. That said, Dark Moon makes a bad habit of forcing you back through previously explored levels, a move which artificially extends the game's length. And besides, the graphics benefit from the move to 3DS via great use of stereoscopic 3D--many rooms become a whimsical 3D dioramas thanks to the handheld’s unique abilities.

Luigi’s Mansion: Dark Moon weighs in at about 14 hours long, though it’ll feel longer thanks to skillful pacing. And the game has a number of tools to keep sucking players back in. Each mansion has a ton of collectibles that in turn unlock new time attack modes for each stage. Then there’s the fairly basic multiplayer, which is worth a try if you can get up to four 3DS owners in the same room, but it’s a mostly forgettable.

Like a trip through a carnival funhouse, the thrills of Luigi’s Mansion: Dark Moon may be simple, but they’re exciting nonetheless. Here’s hoping it doesn’t take another 12 years before we can get back into the ghostbusting game.