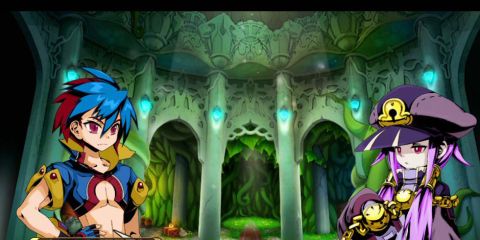 Legasista is NIS America’s latest entry into the console market, following the release of its portable ClaDun titles, which feature familiar JRPG elements mixed in with classic top-down dungeon exploration. While seemingly geared towards a niche audience of players that enjoy anime-styled protagonists and fanciful storylines, Legasista provides enough varied elements to create a welcoming experience for anyone to enjoy.

Our token spikey-haired protagonist is Alto, a young boy who enters a forbidden tower in search of an ancient weapon capable of breaking the curse that has crystallized his sister. Alto has no trouble finding this weapon, but because it is in the form of a young girl named Melize, who ends up losing her memory, Alto must then explore the dungeons inside the tower for a way to make her remember how to bring his sister back to normal. The game’s story, while slow at times, introduces several characters to add to your party and is played out through side-by-side conversations that showcase the cast’s own unique personalities and backstories. Conversations are quite humorous and give life to the game despite their flat cutscene format. But, unless you know Japanese, expect to do lots of reading, as the game isn’t dubbed.

Check out a trailer for Legasista!

Dungeon crawling is the heart of the game, and each one you explore requires you to defend yourself against enemies and make your way to the exit collecting as many treasures as possible. It doesn’t take long to realize why Legasista distinguishes itself as a “survival action RPG”. Once your HP drops to zero, your armor and weapons are the next to take damage and can break, rendering them useless. Dying will simply teleport you back to the game’s hub called the Railyard, but you will lose all the items you found up to that point, making preparing for battle just as important as the battle itself. Clearing a dungeon is a rewarding experience and returns you to the Railyard where you can then prepare for the next one. As much as its dungeons provide quick bursts of fun, we found ourselves taking breaks every couple of hours due to this repetitive format.

While its dungeons are simple in form and layout, the game’s inventory system is quite intricate and even comes with an extensive tutorial to guide you through its features, but chances are you’ll still have questions due to the sheer amount of information there is to learn. The equipment screen, for example, is quite intimidating and shows that each item has different attributes that affect your character’s stats in some way or another. Some items even have effects with their own secondary effects that alter the overall attributes of an item. To complicate things even further, you can even swap these secondary effects onto other items. Additionally, characters can not only change jobs, but they can also change their HP and equipment allotment depending on various play-styles they unlock through leveling up. Veterans to the genre will appreciate the tools the game offers with which to tinker their characters’ stats, but the game also provides an auto-equip option for those who aren’t too particular about their numbers.

To keep players busy beyond the main game, Legasista also contains randomly-generated dungeons called “Rangeons” that you can explore for EXP and rare items. These last longer and get more difficult the deeper you go. Much of your success in these dungeons will also depend on luck, since you’ll need to travel through gates that can change the max level of enemies and the probability of getting rare items on each floor. Despite this lottery-like aspect to some of these Rangeons, the drive to reach the 100th floor in each dungeon is what kept us leveling up our characters even after we completed the game. Plus, you can even create your own characters from scratch to join you in your journey, further personalizing the experience.

Despite following a basic format of dungeon exploration, Legasista provides enough additional components to give players a fulfilling experience. Though the feeling tends to wear thin over longer play sessions, it feels good surviving through dungeons with a pocketful of treasure knowing that your preparations paid off. While some of its more complicated features will alienate players unfamiliar with the genre, Legasista is ultimately a fun dungeon crawler that lets players–JRPG fans or not–play it the way they want.