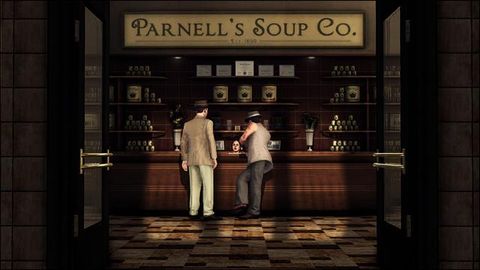 There are two things you need to know going into L.A. Noire, and the first is that this isn't just a 1940s-set Grand Theft Auto. Yes, it features a lot of driving and shooting in an open world, but its real focus is on investigation. And while you're probably already aware of its detective-sim aspects, you might be surprised to learn that you’ll actually spend a lot more time scouring crime scenes and questioning suspects than you will chasing them down and/or shooting them dead.

Second, Noire pulls very few punches. The story of Cole Phelps, an ambitious young detective and war hero working his way up the ranks of the LAPD, it delves into the seedy, frequently disturbing underbelly of 1940s Hollywood. As in seemingly every work of LA-set noir fiction, there's a cesspit of violence and corruption lurking just beneath the sunny glamour, and Cole's job is to wade into it daily, coming into frequent contact with creepy rapists, wife-beating drunks, grieving families and at least a few battered, naked and/or burnt corpses.

The content isn’t much more graphic than your average TV cop drama (apart from the occasional nudity), but it's heavy subject matter for a game, and Noire plays it surprisingly straight, with very little of the wry humor that characterizes most Rockstar releases.

Assuming those first two paragraphs didn’t scare you off – or, better yet, that they piqued your interest – odds are you’re going to love L.A. Noire. Bringing together aspects from GTA, the Ace Attorney games and the combined works of James Ellroy, Raymond Chandler and every film noir director ever, Noire feels like the first truly complete detective sim we’ve ever played.

It’s also the most compelling. As it unfolds across 21 separate cases, Noire weaves fascinating narratives about gangsters, serial killers, corrupt doctors and a stolen shipment of army-grade morphine – and while they all seem separate, they gradually come together to create a larger, overarching story that isn’t completely apparent until the very end. All of this is carried out with some fantastic acting, which – thanks to the revolutionary facial-capture technology used in Noire – is at once deeply convincing and faintly eerie.

At the center of it all is Cole: strait-laced, educated and seemingly humorless, he’s out to earn citations and make a name for himself – and at first, he comes off as kind of a robotic douche. That changes over time, however, and – thanks in part to the World War II-flashback cutscenes that unfold between cases – you’ll gradually learn that he’s much more complicated than he appears. While you wait for him to grow on you, you’ll get plenty of personality from his five partners, who change with each “desk” Cole works on over the course of the game.

Some are friendly, some are cranky and some are complete bastards, but one of them will follow Cole at all times to provide hints, running commentary, fire support and (if you don’t feel like driving) the ability to fast-travel to any point on the huge map. (They can also get in the way, though, so try not to wander into any cramped dead ends or you might get stuck.)

Regardless of which desk you’re on, most cases involve six basic types of gameplay: investigation, interrogation, running, fighting, driving and shooting. During investigation sequences, you’re set loose in a crime scene (or other place of interest), and wander around looking for clues, which can range from seemingly insignificant documents to gruesome wounds on a corpse. It’s often not enough to just find them, either, and you’ll often have to open an object or move it around a bit for its significance to become clear.

To make this less daunting, there’s an assist feature that vibrates the controller and plays a piano tone whenever you’re near a clue. While the assist is fun, it also tends to turn investigations into bouts of wandering aimlessly in search of the next buzz, so those who’d rather use their actual powers of observation can turn the feature off. (Either way, “investigation” music will play until all clues are found, although you can turn that off as well.)

The clues you find are then instrumental in the interrogation phase, during which you’ll use Cole’s notebook (which functions suspiciously like a PDA) to ask questions of witnesses and suspects. This is also where Noire’s impressive face-capture technology comes into play, as you’ll then need to watch their expressions to see if they’re hiding something.

Above: One of those options is the right answer to his statement – the other two will make you “fail” the question

While the facial capture allows for a full range of human expression, you don’t need to worry about the actors being too subtle; if they’re telling the truth, they’ll usually stare unwaveringly into Cole’s eyes, while most liars look shifty and nervous. At that point, the question isn’t whether they’re lying, it’s whether you have a clue that proves they’re lying – and if you’re not sure, whether picking “doubt” is maybe a better option.

Think of it like the press/accuse system from Phoenix Wright, except that you only get one chance to correctly judge each answer (unless you’re replaying the case, of course). Get too many wrong, and you’ll still end up completing the case successfully – thanks to branching outcomes, the game always finds a way, whether it’s by introducing a last-minute witness or redirecting you back to some clue you missed – but you’ll likely get yelled at by your captain for incompetence.

It’s a good thing, then, that you can draw on a pool of up to five “intuition” points, awarded for solving smaller cases and/or leveling up Cole’s rank (which also awards new outfits and access to unique vehicles). Spend an intuition point, and you can eliminate a wrong answer during questioning (as well as most of the wrong evidence for backing up a lie accusation), or go online to see how other players have answered the question. It’s also possible to reveal all the clues at a crime scene, if you’re stumped during an investigation.