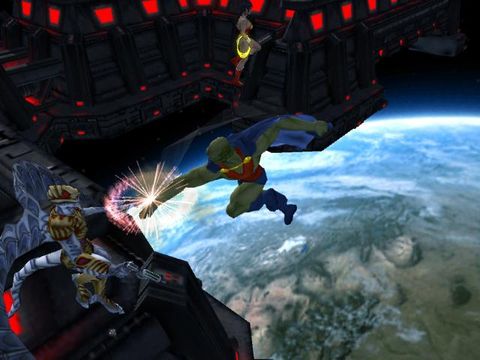 The crown jewels of DC Comics (along with Hawkgirl) are set to invade your console in an all-new action RPG. Justice League Heroes takes Snowblind Studios' gameplay formula (previously used in fantasy settings) and transposes it onto some of the mightiest heroes in DC Comics (along with Green Arrow). The results are solid, but unspectacular. It's a fun game for one or two players, but not quite up to the heroic and epic nature of the Justice League.

Snowblind Studios has been making the same game (with incremental upgrades) since 2001's Baldur's Gate: Dark Alliance. Whether it's Forgotten Realms or Norrath, the developer offers solid hack-and-slash action with heavy RPG elements. If you're familiar with those games then you'll feel right at home with Justice League Heroes. You run around levels (which are unfortunately boring in this game), beat up minions, collect items and kill a boss at the end. The gameplay is tried and true, but seems dated compared to the competition (Marvel Ultimate Alliance).

The cast of heroes draws from modern Justice League members, classic Leaguers from the satellite era and mainstays from the animated series. It's a solid mix that blends DC's pillars (Superman, Batman and Wonder Woman), people that have been in nearly every incarnation of the league (J'onn J'onzz... though he's technically a Martian) and characters getting lots of play in the cartoon (Green Arrow and Hawkgirl).

In terms of gameplay, the characters are well-differentiated and unique (with the criminal exception of the Green Lanterns, which will be discussed later). You have your brawler, long-range and quick-attack archetypes, but are allowed a good degree of customization, allowing you to experience the game in different ways. The handling of Zatanna is particularly impressive; this mystical heroine's abilities are difficult to translate to a videogame (she can pretty much do anything by reciting a phrase backwards), but the developers did a great job at conveying how powerful she is.

Heroes are defined by their villains, and like the game in general, Justice League Heroes' rogues' gallery is uneven. You have galactic threats like Darkseid and Brainiac teaming up with global menaces like Gorilla Grodd and The Key. Unfortunately, their characterizations are poor and only Darkseid comes off as a real threat. The reason for this is a weak narrative... which conveniently brings us to the next point.