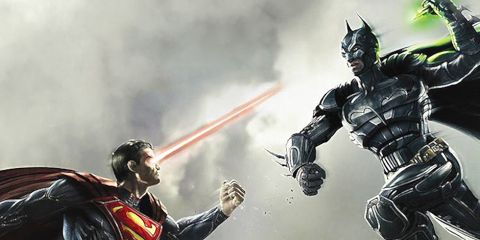 With Superman, there’s always that underlying tension: What if one day, he just snapped? What kind of havoc could the all-powerful Kryptonian wreak on mankind? You’ll get to experience his terrifying strength firsthand in Injustice: Gods Among Us, the latest 2.5D fighter from NetherRealm Studios that pits DC's most iconic heroes and villains against each other. It’s one of the most accessible, adrenaline-charged brawlers around, and despite a few missteps, Injustice will be a surefire hit with fans of the brand and genre alike.

The 24 heroes and villains that comprise the Injustice roster offer stellar variety, and half the fun of using them comes from how unique and powerful they all feel. The other half lies in the sheer intensity of the attack animations: Every uppercut and gut punch has a palpable force to it, and the bombastic super attacks are the epitome of crowd-pleasing. It all looks stunning, thanks to graphics that strike just the right balance between realism and cartoonish color. Sound also plays a huge part in the impact of your attacks--when The Flash does a running punch with the Earth’s circumference as the wind-up, the crunchy sound effects and eye-popping visuals will make you feel the force of the blow.

No matter your playstyle, you’ll find someone to love in Injustice. Like lengthy, big-damage combos? Green Lantern’s your guy. Solomon Grundy and Doomsday will please those with a preference for brutal bruisers, while tricky players will love Batman and Green Arrow. Somewhat obscure pugilists like Ares and Killer Frost may not have the notoriety of Shazam or Wonder Woman, but they’re no less fun to bash faces with. It’s not all about your preferred brawler, either--the environment can have almost as big an impact on a fight as the chosen combatants. This is due to interactables, which let you wield the scenery as a weapon, and cinematic stage transitions that are the superhero’s equivalent of a hip-shattering tumble down the stairs. This focus on the stage as a deciding factor is refreshingly different and easy to grasp--it won’t take more than a few matches to ascertain where the interactable objects are, and how to avoid them when they’re used against you. That said, you can always disable them if you prefer to stick to the basics.

Each fighter is made all the more unique by their Trait, a character-specific ability that can completely alter their approach or simply enhance it. Joker’s parrying Trait is a huge factor in playing him properly, while others like Aquaman’s water shield simply reduce the risk of going on the offensive. They’re all activated with a simple button press--in fact, simplicity is one of Injustice’s strong suits when it comes to controls. Instead of the two punch, two kick layout of Mortal Kombat, Injustice uses the easy-to-grasp setup of light, medium, and heavy attacks plus a Trait. The Block button has been done away with entirely, while special move inputs and combo timings are more forgiving than your typical fighting game. A new one-use Wager move provides a great equalizer for close matches, though it's less exciting to gamble chunks of your super meter when the opponent can clearly outbid you.

Giving each fighter their own distinguishing Trait makes everyone feel varied; the drawback is that you’ll have to do some homework on which characters can do what before you’ll know what you’re up against. But when these Traits promote an irritating style of play, it can be a problem. When it comes to long-distance zoning, Deathstroke is king, with Superman, Black Adam, and Harley Quinn being potential projectile spamming culprits. These fighters all have moves that make them excel at thrashing you from afar--but it nearly threatens to ruin the game for you if you’re at the mercy of an unending stream of handgun fire or laser beams. Watching a skilled Deathstroke is boring; playing against one is absolutely infuriating. With practice, you’ll find ways to get in on these spam-centric defenses, but having to face them may make you give up on the game entirely.

Of course, these kinds of frustrations are only likely to arise during multiplayer affairs. In terms of the single-player, Injustice offers plenty of options. The star of the show is the game’s story mode, a gripping campaign that offers a great explanation for why heroes are beating each other to a pulp, and why the Joker doesn’t die from taking a hail of bullets to the face. It’s exciting from beginning to end, feeling like an epic crossover comic come to life or a Justice League feature film. Seamless transitions between cutscenes and fistfights make it a captivating 3-to-5-hour thrill ride--and even if you blow through the campaign in one marathon sitting, you’ll walk away satisfied.

Once you’ve completed the story mode, your other solo options are some typical arcade-style Battle ladders or some charming (but ultimately superfluous) mini-games in the S.T.A.R. Labs. Your time would be better spent testing your mettle against other players, whether through living room duels or Injustice’s excellent online experience. The dependable netcode keeps lag at a minimum, and the online Theater view lets you switch between spectating a match and inspecting other players in the lobby with zero hassle (something that ought to be the standard for all future fighters).

For all its impressive visuals and enjoyable online play, some areas of Injustice feel like they’re lagging behind the contemporary competition. The controls stay faithful to the pre-established physics of Mortal Kombat, perhaps to a fault--the fixed jumping angles, stiff dash distances, and general heaviness of the characters can feel a bit clunky when compared to other 2D fighters. Once you’ve acclimated yourself to the controls, they’re undoubtedly solid, but getting to that point may take a few hours of practice.

Injustice also takes alternate costumes a step further past the typical palette swap by giving some costumes their own intro and victory animations. But many outfits have been relegated to pre-order bonuses, while others, like the coveted Yellow Lantern outfit, are doled out seemingly at random as you level up your profile. It’s disheartening to see a sweet alternate costume online, only to realize that you won’t probably get the chance to don those spiffy tights any time soon.

All-in-all, Injustice is a licensed fighting game done right, sure to please fans of the brand and the genre. Its accessibility lets casual gamers or avid comic readers enjoy themselves, while retaining all the depth that fighter enthusiasts crave. If you've ever wanted to witness Batman and Superman duke it out in a brutal showdown, there's no better time than now.