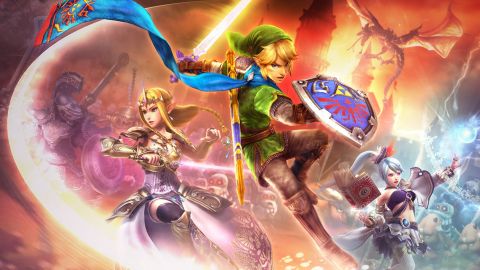 The stories in the Zelda series often tell of ancient wars and heroes banding together to stem the tide of a great evil. You know, wars that seem like they'd be totally awesome to play in a game. Hyrule Warriors makes that ‘if-only’ scenario a reality. Here, you finally take part in an epic war in the Zelda universe, fighting the forces of evil on a battlefield and defeating enemies through brute force rather than push-block puzzles. While Hyrule Warriors carries on some beloved elements from the Zelda series and provides plenty of fanservice, Warriors series tropes drag down what could have been an awesome spin-off.

Zelda fans will love all the plentiful nods to the series: like how Impa's massive sword is actually the Giant's Knife from Ocarina of Time, and that Sheik's Harp attacks launch elemental spells by playing songs like Fire Temple's Bolero of Fire, or the Water Temple's Serenade of Water.

If you aren't a big enough Zelda fan to get the series references, Hyrule Warriors doesn't offer much to catch you up. Characters are flung in your face willy nilly with little explanation of who they are. You're just expected to know who's who, and why they're doing what they're doing. On top of that, the game clings to series revelations that every Zelda fan would know, like the true identity of the mysterious ninja Sheik. It makes you wonder who the game is made for with such obvious plot reveals for Zelda veterans and nonexistent character development for newcomers.

After the first several hours of unlocking characters, moves, and environments through the story campaign, the gameplay becomes a slog. It can be incredibly satisfying to discover the flashy movesets of each character, fight classic enemies like the Lizalfos, and unlock new characters. Koei Tecmo was spot on capturing each of the character's personalities in their fighting style, and the combat is an absolute thrill for the first few hours. But then you're forced to repeat the same shallow gameplay over and over again.

Watching the intricate combos a few times is cool, but when you're playing a 20 to 30 minute mission that requires you to pull off the same half dozen moves nonstop, over and over again, killing thousands of enemies that do little more than just stand there, the thrill quickly fades. In almost every instance, once I've been playing a new character for just a few minutes, their moveset starts to feel utterly worn out. It leaves me constantly looking for something different, never satisfied with the one-note character I've just unlocked.

The environments don't provide much in the way of variety either. You battle in classic locales like outside the Deku Tree or on Death Mountain, but the different levels are just palette swaps. The missions drop you in the middle of a battlefield map consisting of narrow lanes and little else to interact with. Everything you do revolves around killing enemies to capture forts. Need to flip a switch? Capture the fort containing the switch. Want to open a door? Capture the fort at the gate's entrance. There are no puzzles to solve or actual thinking involved. You just mash buttons and kill bad guys.

The only time I felt challenged was during the boss battles. The majority of the time bosses consist of unlockable characters, like Midna or the Ghirahim, and fighting them involves dodging telegraphed attacks and mashing attack buttons. But there are also boss encounters with classic Zelda monsters like King Dodongo. Taking down these monstrosities forces you to use special items earned in the level--like the classic Zelda games--giving the battle a bit more depth (followed by plenty more button mashing). However, these battles are spread too thin between button mashing sprees, and the game is far too quick to throw you repeat boss encounters down the road.

The additional Adventure mode and co-op don't help to alleviate the monotonous gameplay. Adventure mode is a board game-style side activity that allows you to explore the original Zelda's overworld, collect additional items, and level up characters. Sadly, you'll still battle the same bland enemies in repeat environments for your rewards. It can be fun to get a friend in Co-op to coordinate fort captures, but button mashing with a buddy is still button mashing.

The best part of Hyrule Warriors is seeing the stylized versions of the classic characters, taking the characters' movesets out for a spin, and absorbing the love Koei Tecmo has for the Zelda series. But nostalgia and fanservice can only take the game so far. Hyrule Warriors is held back by monotonous gameplay, brain dead AI enemies, and overlong missions that quickly exhaust you with repeat actions, enemies, and environments. If you're an enthusiastic Zelda fan that is somehow immune to the boredom of endless button mashing, Hyrule Warriors might be an enjoyable experience. Otherwise, you're better off skipping this one.