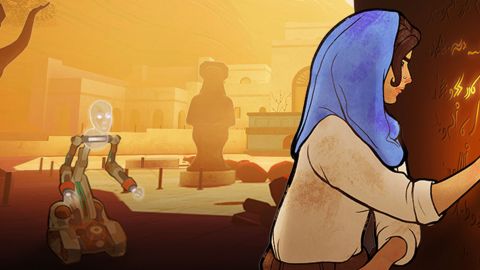 A fascinating, fantastical world let down by plodding pacing.

Heaven’s Vault makes a world filled with robots, ancient gods, time loops, rivers in the sky and teleporters completely believable. Its writing, which never wastes a word, and world building are both meticulous: spend two minutes in one of its beautiful towns and you’ll feel like you know the place, whether that’s through a character’s childhood story or a statue’s inscription about the locals’ religious beliefs. But the plot progresses too slowly to draw you in, and boring ship-sailing sections drive a wedge between you and the setting you’re trying to explore.

As archaeologist Aliya Elasra, you travel the Nebula uncovering artifacts and deciphering an ancient language. Aliya starts with almost no knowledge of that language, so you’re learning it with her. When you find an inscription, symbols appear on screen as a single, long string, and you drag and drop a bank of words to guess the meaning. It starts as guesswork, but it quickly makes you feel clever. It displays related words that have similar shapes, and after a few hours I could recognise individual symbols, such as one that indicated the past tense, or another that turned a word into its negative form. It’s a brilliant feeling to know exactly what these squiggles and lines mean even before the game tells you.

Each object you find reveals new information about the period of history it was made in, and drops a short text box onto a timeline that you can peruse at any time. You can zoom out to see the major events of the past 1,000 years, or zoom in to read the key moments in Aliya’s life. Information is tagged by age, location and character, and the slick interface makes it easy to lose 20 minutes clicking from node to node.

The environments are stunning. Each town, city and slum has its own architectural style, and no two look alike. I explored underground mines filled with toxic gas, layered vaults that burrowed into mountains, cliffside villas, and marketplaces filled with fruit sellers. I love the colourful art style, which contrasts hand-painted characters with computer-generated backdrops, making the people stand out.

Both the environments and the characters within them are full of personality. Each screen has several points of interest to click on, and doing so yields a short, poignant passage, sometimes accompanied with Aliya’s thoughts for extra context.

Dialogue is precise, each word designed to reveal something about the person you’re speaking to. That goes for Aliya—the dialogue options let you bend her personality to your liking—and your sarcastic companion robot, Six, who made me laugh several times. I like that everyone is flawed, too: traders will try to rip you off or pick your pocket, and even your supposed friends are cold at first.

I just wish the story was as satisfying to uncover as individual locations. You start off searching for missing roboticist Janniqi Renba, and having that clear goal for the first five hours was more than enough to propel me eagerly from moon to moon. Everything I found cleared up part of the mystery, and I gradually deduced what had happened, all the while learning about the history of the world.

You soon stumble into a wider story about the origins of civilization. I like that you have the freedom to go where you want to pursue lines of enquiry, following or discarding leads as you fancy, reporting back to—or ignoring—the university professor that sets your tasks. Unfortunately, Heaven’s Vault simply asks you to solve together too many mysteries at once.

On their own, questions about how the rivers in the sky formed, how teleporter-like “hoppers” work, and where robots come from are intriguing. But when you’re trying to uncover them all at once it feels difficult to make progress. You’re always learning about the world, but Heaven’s Vault never pieces it all together into a single story that drives you forward, and jumping between themes meant I often forgot key information I’d found out earlier. It made the ending far less impactful than I’d hoped.

The pacing isn’t helped by boring travel between locations. You pilot Aliya’s ship, called the Nightingale, on rivers in the sky, turning left or right where the current forks. Journeys are tedious and repetitive—some trips are just 15 empty minutes of slow floating.

It’s at its worse when you’re searching for a specific spot. Collecting artifacts will reveal the rough location of a moon you want to visit, but you’ll have to search around to find an exact landing point. Often, this means going around in circles through identical-looking channels, and Six’s instructions about which way to turn sometimes prove wrong, lengthening journeys further.

The sailing is by far the worst bit of Heaven’s Vault, and it’s a real shame that it takes up so much of your time. But even the game’s best moments—exploring moons and towns—are marred by wonky controls. White dots representing points of interest can only be interacted with if you tilt the camera in a certain way, or stand in exactly the right place.

I like that you can dictate the idle chatter between Ariya and Six, pressing button prompts to ask a question or remark on your surroundings as you explore. But doing that makes all the white dots vanish, so it’s hard to both have a conversation and search for clues at the same time. It’s a strange design choice.

It’s a recurring theme in Heaven’s Vault: everything I like about it is, at least partly, ruined by the things I don’t. The world is fascinating, and I’ve enjoyed digging into its rich past, but getting from point to point is a chore. It’s a joy to learn a new, Ancient language, but finding inscriptions can be fiddly. The writing in Heaven’s Vault makes the towns you visit come alive—but the story struggles to find its voice.

A fascinating, fantastical world let down by plodding pacing.