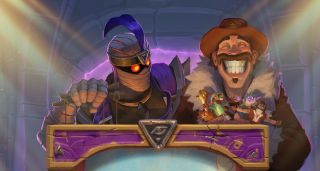 At one point, members of Blizzard's Team 5 studio made a VR version of Hearthstone, but it never made it past an internal prototype. As lead effects artist Hadidjah Chamberlain told PowerUp, two developers made the prototype during an annual internal event, and while the studio isn't actively pursuing Hearthstone VR today, the prototype sounds like it was mighty promising.

"You could walk around the tavern and sit down to play a game with someone," Chamberlain said. "They only had two weeks, so they only got as far [allowing you to] throw cards at the table, and you could flip the table over!"

Hearthstone's tavern is a magical place filled with merry competitors, but we never actually see much of them in-game - apart from Bob the Battlegrounds master's ever-smiling mug, of course. It would be awfully cool to explore it up-close in VR and literally pull up a chair by the hearth. I'd also appreciate the option to flip a digital table, if only as a way to vent some frustration after losing to the seventh Face Hunter in a row.

Physically tossing cards onto the table might be fun too, but I do worry about the accuracy of the hand tracking. Reeling back and slamming a Dragonqueen Alextrasza sounds fun, sure, but how long until someone accidentally Pyroblasts themself in the face because their cat walked in front of their VR cam?

The latest batch of Hearthstone nerfs hit multiple Galakrond decks, including Warrior and Warlock, as well as Deathrattle Rogue.