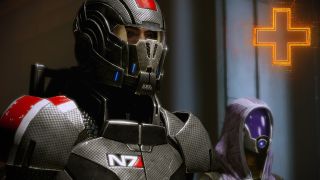 We're celebrating the end of an incredible decade for games, movies, and TV shows. Mass Effect 2 is one of the games that defined the last 10 years of play, placing 6th in our 100 best games of the decade rankings. Read on to find out why...

You're not often met with a sequel that kills off and revives its protagonist within the opening ten minutes, but Mass Effect 2 did just that and created one of the most memorable opening sequences to date. From the moment the first beat of music plays after the Normandy ship explodes and Shepard is sent hurtling into space gasping for air, everything is sent into disarray. The ship you commanded is no more; your crew has scattered; and for all intents and purposes, the Shepard you once knew is gone. Mass Effect 2 so brilliantly established a pivotal shift in tone and feel from the get-go and effectively signalled an entirely new beginning for the N7 soldier.

All these years later, Shepard's revival has almost become a metaphor for how the second entry in BioWare's beloved franchise gave the series a new lease of life and took the space-faring RPG to new heights. By doing away with some of the more irksome features - like the clunky Mako - and building on the solid foundations laid down by the first Mass Effect game, Mass Effect 2 proved that BioWare could offer a unique and engrossing RPG experience you just couldn't find elsewhere.

A crew to protect

A huge part of that was Mass Effect 2's focus on your companions, and heightening the stakes to the point you could lose them all made Mass Effect 2 one of the most memorable RPGs of the decade. The entire premise of Mass Effect 2 centres around the idea that you have to set out on a suicide mission, and with limited resources, every member of your crew truly counts. Your companions' very survival now hinges on your efforts to get to know them, which makes every relationship you take the time to form even more meaningful than ever before.

The companions also serve to add more weight to the role you find yourself in as the involuntary hero. It's easy to become detached from saving an entire universe because it's so all-encompassing and grand in scale, you can't quite comprehend the consequences if you fail to succeed. The fate of your crew, on the other hand, adds more immediacy to your actions because the loss of a crew member affects you directly. For Shepard, the Normandy 2 ship becomes their universe, and the tight-knit crew are its people. The very thought of losing a companion makes the threat you're under so much more tangible.

None of this would have worked so well if Mass Effect 2 had failed to make you truly care about your companions, though. After all, if you didn't feel anything for your crew, the final mission wouldn't be as nail-biting and intense as it is. Thankfully, BioWare's stellar writing fleshed out every member of the Normandy 2 crew with their own distinct personalities, backstories, and motivations.

As a result, every character truly feels like a real individual person (or alien) you truly end up caring about. From Garrus Vakarian, the lovable, collaboration obsessed sharpshooter, to the tattooed, badass biotic Jack, the diverse roster brings the big starry expanse of space to life and adds so much heart and depth to the overall experience.

A galaxy worth saving

In classic BioWare form, you can also take your relationship to the next level with a companion and romance a member of your crew. The romance also feels more involved this time around - no romance is the same, and every character has their own ideas about love and everything in between. This aspect adds even more depth to the characters and the bonds you can develop. Even if - heaven forbid - you took all the romance out of it, the companions are still Mass Effect 2's beating heart.

From the opening moment, Mass Effect 2 reshaped the mould of BioWare's franchise and offered an RPG experience that completely outshined the game that came before it. It's proof that sometimes going in a completely different direction can pay-off, and thanks to its expertly crafted narrative and memorable characters, it's earned its place as one of the best games of the last decade.