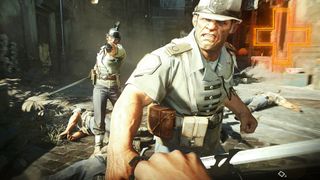 We're celebrating the end of an incredible decade for games, movies, and TV shows. Dishonored 2 is one of the games that defined the last 10 years of play, placing 21st in our 100 best games of the decade rankings. Read on to find out why...

To play in Dishonored 2's intricately-crafted spaces is to find yourself navigating complex webs of possibility. Your choices need never be binary: stealth or violence; high or low; left or right. Routes and options interweave, as flexible as they are compelling. Exploration and experimentation are encouraged, allowing you to switch approaches when the need or desire takes you, or loop back to prod at other potentials when you overhear a guard let loose a tantalising piece of info, stumble upon the code to a safe, or spot an intriguing looking route that leads up to that balcony across the way.

Dovetailing beautifully with the design of these spaces are the supernatural powers you can unlock to enhance your character's abilities: the unendingly satisfying Blink or Far Reach to teleport yourself around; Possession to take control of rats, fish and guards; Shadow Walk to transform yourself into a stealthy spectral shadow. These fun and inventive abilities allow you to draw further lines in that web of possibility. Some are clearly anticipated by the game's developers: possessing a rat to crawl through a vent to get around a flesh-frying Wall of Light, or blinking up to a window to avoid a violent encounter with patrolling guards. However, these powers are also built with creativity in mind, allowing you to combine them with each other, and other systems, in all kinds of creative and stylish ways.

The ability to create a clone using Doppelgänger has obvious uses as a distraction, but there's nothing to stop you combining it with Domino, which strings the fates of enemies together, to connect them to your clone, then murder it, like a lethal voodoo doll. The ability to possess corpses is presented as a tool to hide from passing enemies. However, as long as your moral code doesn't forbid desecration of the dead, thinking outside the box will lead you to the realisation that you could also lob a corpse into the air, possess it mid-flight, and then drop out above an unsuspecting enemy to perform an aerial assassination. This combination of cleverly-designed spaces, rich with possibility, and a range of abilities that simultaneously enhance your engagement with the options developer Arkane has presented you and allow you to go beyond the boundaries of what's expected with some creative thinking, is a vital part of what makes Dishonored 2 special.

As if the gameplay possibilities within these spaces weren't enough, the city of Karnaca is one of the most memorable video game locations of the decade. It's a city that is able to hold the romance and beauty of its sunlight inspirations in tension with the ugliness of its violence and injustice. It's a city that tells a story, its history etched into its very architecture, showcasing a decayed grandeur that's become a canvas for the tensions that now grip the city.

And then there is, arguably, its most memorable location. The lauded Clockwork Mansion level. Effectively a gigantic puzzle box, the level reassembles itself around you as you pull on levers that see walls slide in and out of place into new configurations. This being a Dishonored game, you are not obliged to play by the Mansion's rules and can squeeze your way into the guts of the mansion to see the cogs and pulleys that make it all work. This means there can be no trickery at work: Arkane had to build a Clockwork Mansion that actually works, that makes sense from inside and out, that allows the player to jump between the luxurious artifice of the Mansion's rooms and its mechanical skeleton, shifting between them and reshaping the puzzle box as they navigate a path to their target, the designer of the Mansion, Kirin Jindosh. It would have been a nightmare to design, but the commitment to a fulfilling a promising concept, with every difficulty that entails, is indicative of the ethos that Arkane brought to this game at large. Their efforts pay off spectacularly.