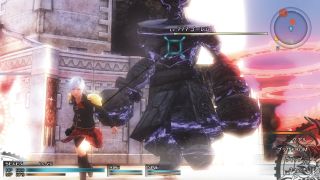 This little doozy may be a spruced-up version of a game that came out in Japan three years ago. On PSP, no less. But it’s also the most exciting thing to happen in the Final Fantasy universe for some time. Why? Because its director, Hajime Tabata, has also taken over the long-troubled FFXV, and Type-0 HD provides a glimpse of what that game will eventually become.

The main area of inspiration is the battle system. In Type-0 you have access to a roster of 14 different characters: students of a university of magic who are tasked with saving their world from war. Each one has equipment and skills suited to different types of enemy, including ranged magic and weapons and melee attacks. It’s a game of tactical combat, then, but a direct control method and in-field encounters ensure Type-0 feels like an action title as much as it does an RPG.

The version we play has automatic Reraise enabled (a spell that resurrects our characters upon death), but in the final game once a party member is down they’re out of the roster until you can revive them at the next save crystal. The game plays with this risk-reward system by throwing in a sacrifice mechanic, whereby a character summons an Eidolon (a huge, destructive monster) to unleash massive attack damage for a limited time before dropping dead.

It’s still a PSP game transferred to the big screen, of course. This is apparent in the somewhat fractured progression (the field is broken into zones with short loading screens between them), a severely limited palette of voice samples and the visuals themselves. The textures on walls and floors don’t look at all HD – they’re not up to PS3’s standards, let alone PS4’s. And although this build is only around 80% complete, Tabata tells us the team’s plan is to focus on brushing up key artwork and effects such as lighting and shaders, rather than to rebuild the assets of the game.

Luckily the art direction on show was gorgeous to start with and, anyway, the real draw here is the action and the promise of how it may be transferred to Final Fantasy XV. Loading screens aside, the pace is still quick and snappy, and this retooled PSP entry feels far more modern than the majority of recent Final Fantasy games. Which bodes well for the future, obviously.