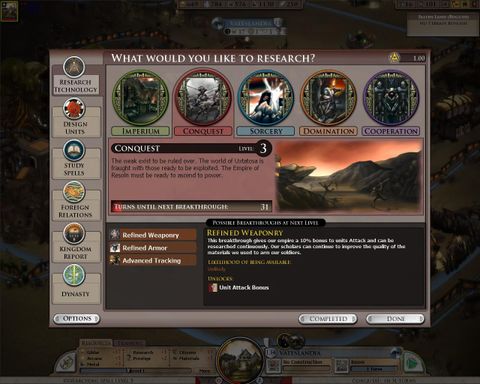 Elemental: War of Magic is convoluted and ridiculous and sometimes fun. Part of this convolution (and most of the fun) can be attributed to the genre, which is called 4X (it stands for explore, expand, exploit and exterminate. Get it? 4X?). If you’ve never played it, well, it’s sort of hard to explain; suffice it to say, there are multiple things to juggle and multiple ways to win.

The ridiculous spots are rooted in Elemental’s rocky road to its current version. We held our Elemental review until its crazy updates slowed, though they’re still coming nearly every week. Elemental was released with so many bugs it would have made Starship Troopers jealous. It seems impossible this is the same publisher that once vowed that gamers had the right to completed games in theirbill of rights.

Currently, Elemental’s had more patches than a pirate ship and the things keep coming. Each patch fixes glitches or adds features, but it won’t fix everything. There are core flaws in the game, which no patches will fix.

Controlling characters is a royal pain in the butt. Sometimes selected characters just stand there as you issue dozens of commands, and when they do move, your characters’ slow pace and obstinate refusal to walk around any object in their way makes journeying more tiring than a 24-hour David Duchovny Marathon. Even the most basic of commands - right clicking an empty tile to send your squad in that direction - is more-or-less broken. For some baffling reason, clicking more than once before your squad has arrived at the exact tile transports your units backwards.

When you do actually move your character, you control the leader, called a Sovereign, and an army that follows him around (eventually you can recruit “champions” to lead additional armies). There are about a thousand ways to win a match, ranging from political to magical, but more often than not, destroying your enemies is the easiest way to go.

Computer opponents also have Sovereigns, and destroying them crushes their kingdom. But due to piss-poor AI, enemy Sovereigns mostly just wander around the map with a random assortment of units. Squashing the wandering idiot proves far, faaaaar too easy time and time again. This is how pretty much everything pans out in Elemental. Great and expansive ideas are constantly squandered by pitiable delivery.

Even in the heaps of bad (and they’re really more like mountains than heaps) the game has some redeeming qualities. Certain touches, like the freedom to name and customize units are fun enough to sidetrack forgiving players. Creating incredible units with clever names is one of the most pleasurable parts of the game, though ultimately this too is pointless. You should pretty much always create the most powerful units. Entire armies floating around in the same armor, with the same weapons, and the same stats, is awfully deflating.

A complex story attempts to give meaning to each quest, but even the most hardcore 4Xers will feel betrayed by Elemental. There’s very little to love here, and it’s so unbalanced and frustratingly crippled no magic will fix it.