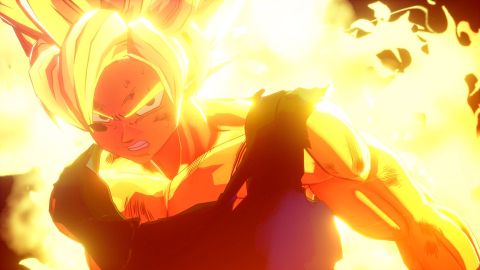 Dragon Ball Z: Kakarot is fun, but so deeply flawed. With fighting lacking nuance, adventuring missing meaning, the faithfully retold story feels like the only appeal.

Dragon Ball Z: Kakarot might be considered an odd name for people who aren’t entrenched in Dragon Ball lore. It’s set in a universe where aliens exist after all, and you play most of the game as Goku, who is himself from an alien race called the Saiyans. There's a reason why Dragon Ball Z: Kakarot has such a name – it's Goku's Saiyan name – but it's an example of the kind of thing the in-game lore misses.

Although that's partly down to the fact Dragon Ball Z is the sequel to Dragon Ball, which is the source of a lot of this exposition, but unfortunately, this means that if you’re here for the story, you might feel a little bit lost in the early stages of Kakarot. It would have been nice to have a proper recap of some of the essential lore to bring newcomers to the series up to speed.

On the other hand, sometimes Kakarot – the game rather than Goku himself – over explains things, as is the case with many of the tutorials. You see, Dragon Ball Z: Kakarot is an action RPG, one with many open areas, but not a fully open world. That means you can go off on side quests, or a plethora of different distractions, nearly all of which have tutorial pages. These tutorials make these distractions feel important like they’re the kind of thing you should be investing your time, and your mental bandwidth, on. The tutorials are lying and should feel ashamed of themselves.

The majority of the many activities, which include but are not limited to, racing, Dragon Ball collecting, fishing, hunting, dinosaur fighting, and even random battles, are largely unrewarding. A lot of the activities will give you items you can use to cook and boost your stats temporarily or give a tiny boost to your stats permanently. But, these boosts are quickly made redundant by the game's own RPG levelling system, meaning the side activities are only worth enjoying for the fun, rather than ploughing a lot of time and effort into.

I’m still choosing to believe that this absurd number bloat is a knowing nod to the constant power-creep of the shows themselves, but it really does render numbers senseless. I used to be an accountant, numbers are never meaningless, or at least I thought so until I saw the way stats change in this game. There’s no rhyme or reason here, abandon everything you know about mathematics and embrace chaos. That’s my main takeaway from every use of a number in Dragon Ball Z: Kakarot.

However, numbers and tutorials aside, the world of Dragon Ball Z: Kakarot is actually quite good fun to explore. There are loads of places to discover from caves to ravines. It's just a shame that there’s not much reason to do so. One of the biggest issues that Dragon Ball Z: Kakarot faces is meaning, at least when it comes to everything outside of the main story. There’s never enough reason to take part in the multitude of things you can do, not unless you’re simply trying to kill time, which renders many of the large open areas effectively worthless.

Of course, many people will be coming here for the fighting – it’s Dragon Ball Z after all, the series that bore the awe-inspiring Dragon Ball FighterZ. However, if you're expecting battles on par with Dragon Ball FighterZ, you'll be disappointed, as they're closer to what you'll find in Dragon Ball Zenoverse. That means over-the-shoulder action, simple controls, and a combat system that is fun, but not all that complex. You can use a variety of attacks, but they’re not all equal, with the basic melee attack and specific explosive attacks like Vegeta's Big Bang attack always proving the most effective. The special melee attacks lack the required, *ahem*, punch, and as a result, end up being there for you to mix things up for yourself, rather than for the tactical advantage.

That results in fighting that's fun for the most part, but comes with a plethora of issues. The biggest are some of the unique abilities the UI has. There’s a thing called Super Armour in fighting games; it lets characters take damage without flinching, meaning they can react faster and even push through certain high-damage techniques. The enemies in Dragon Ball Z: Kakarot, even the basic ones, seem to have access to their Super Armour an alarming amount of the time. This means that you can launch an attack that will blow them away one second, and the next it's totally useless. As you can appreciate, this makes fights regularly feel incredibly unfair.

The other main issue is that certain attacks have these little two-second cutscenes where the camera focuses in on you or your opponent. These are cool, but actually have an impact on the fight when they should be little more than a bit of additional style. You can’t move when the camera is on your opponent, and if you initiate a special attack just before one of these cutscenes, it gets cancelled, no matter how far through it you are. Yet, if the camera is on you, your opponent can still move, which often leads to you getting punched in the face a bit before unleashing your attack on them.

On top of all of that, there are some technical issues too – at least in my PC build. Things like screen tearing are easily solved by messing with your settings, but I also experienced a few fatal crashes that seemed to stop certain cutscenes loading, and completely booted me out of the game. The only way around these seems to be changing my equipped skill. But, there was also a time where Yamcha just floated off-screen during a conversation. I know he’s a coward, but come on.

The worst part of all of this is that there is entertainment to be had in Dragon Ball Z: Kakarot. There’s an undeniable and incredibly winning sense of love for the source material. The kind that you’d have to actively fight to resist the smile wanting to creep onto your face – it’s infectious. Revisiting all of these characters and stories is a joy in itself, and, despite my issues with it, it’s probably the most efficient way to enjoy the story of Dragon Ball Z, which is good for people who just want to watch Dragon Ball Super. However, nostalgia's not enough.

Nearly everything is marred by either a frustrating lack of balance or a lack of meaning. Fun for fun’s sake is great sometimes, but game quests and mechanics should serve a purpose and that’s just not the case here. I have enjoyed my time with the game overall, but it also profoundly annoys me. You could easily spend double the 22 hours I've spent with the game if you want to, but lord, I don’t know why you would.

Dragon Ball Z: Kakarot is fun, but so deeply flawed. With fighting lacking nuance, adventuring missing meaning, the faithfully retold story feels like the only appeal.