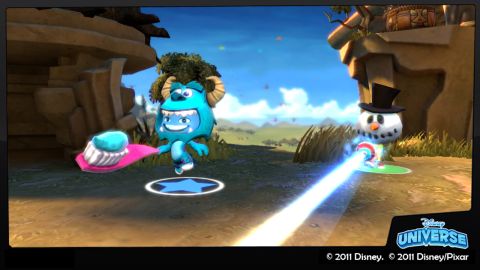 With so much to play, collect and unlock, there’s a helluva lot to love about Disney Universe. However, it’s a little difficult to assume that most of you reading are going to be the ones loving it. So, if you’re in the minority of people who looked at our recent reviews of Uncharted 3 or Arkham City and said “Meh, that’s not for me… got anything simpler?” then Disney Universe might have something to offer.

Speaking as people who are fans of all things Disney to the point of being almost creepy and obnoxious, we were perfectly content to run around and unlock the 50+ classic character costumes, while enjoying the cleverly re-created animated locations set to music that consists of remixed hyper-memorable anthems. Unfortunately, that appeal probably isn’t broad enough to compensate for what most of the hardcore will see as a repetitive, consequence-free button masher of the kiddiest caliber.

Disney Universe is one small spoonful of LittleBigPlanet, yet has a whole lot more in common with LEGO games. Those games are simplistic, all-inclusive experiences built to be enjoyed by anyone and everyone. They present you with instantly understandable interactivity, then shell it in a franchise you already love. Disney Universe has plenty of that, although it doesn’t play with the films and characters as charmingly, or as humorously, and the situations are rarely rooted in anything referentially specific enough to qualify as “fan service.”

Luckily, all six worlds are immediately recognizable, and each location is remarkably varied. Whether you’re solving puzzles, platforming to higher altitudes, or simply running left to right, each level is incredibly distinctive and unique in the hint-heavy goals Disney Universe presents. The combat, however, consists of a single button and can grow a bit tedious when playing solo. There’s usually far too much occurring on onscreen to form anything remotely strategic, so we died a lot. There’s no penalty other than a couple of lost coins and wasted time, although that soothes very little when you can barely tell from when or where you’re being attacked.

But deaths don’t really matter until you jump in with other players anyway, which is where Disney Universe starts to make much more sense. Tackling enemies with your friends cooperatively makes everything more manageable, and more importantly, more fun. You work together toward a common competition goal, and then at the end of a level, collected coins, stars, and the amount of times you respawn get factored into your final score. Basically, there’s no real winner per se, but there are certainly bragging rights to be earned.

Of course, our affection for Disney is deeply rooted in our childhood, so it’s easy for us to put ourselves in smaller shoes and see the appeal. We would’ve lost our preteen minds over something like Disney Universe back when we were rockin’ out with Battletoads and Ninja Turtles, and easily would’ve invested countless hours into this thing. There are so many hidden challenges and costumes that you’ve got a ridiculous number of playable incentives to revisit every level multiple times. Better still, Disney Universe allows players to make a playlist of the levels they like and play them in the order of their choosing.

While the Level Playlist is a phenomenal technological innovation every game could take a page from, other modern aspects might not work for this game. Let’s be honest… six worlds does not a Universe make! But with a solid framework set in place, it’s pretty clear DU has DLC on the brain. We’d love to download new costumes and levels themed after Disney creations (preferably some older than twenty years) but is that lasting appeal going to be utilized when your primary audience is too young to apply for a credit card?

There’s no other way to slice it: Disney Universe is for kids. Or perhaps for you and your kids. Much like the brand itself, the gameplay in Disney Universe is timeless, in that it’s widely accessible and easy to understand. However, if you’re looking for something deeper and more satisfyingly complex, there’s not quite enough on the disc to stand on Disney fandom alone.

GamesRadarChrisAntista
I LIKE TO MAKE THE GAMESRAIDER!!!!!!!1
See comments
Gaming deals, prizes and latest news