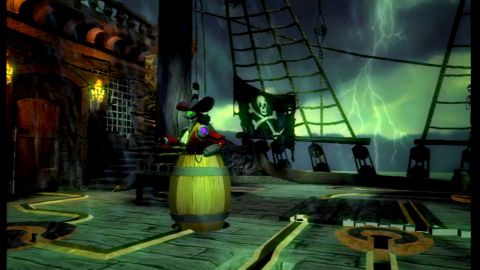 Disclaimer: I’m a hardcore fan of the 3D platformer and a diehard Disney dork.

Now, that’s not to say you too must be able to tell the difference between a Horace Horsecollar and a Clarabelle Cow in order to enjoy Epic Mickey. Nor does it require you to have played all the Jak, Ratchet & Clank games, or everything ever released on N64… but it certainly does help. And judging by those criteria alone, Epic Mickey is absolutely breathtaking.

For animation nerds, it’s going to be nothing short of a godsend. Epic Mickey tells a sorta true story about very real Disney characters and what happens to them once they’re forgotten. The game takes place in Wasteland, a warped, scuffed re-envisioning of Disneyland that is essentially an afterlife refuge, where cultural castaways can live on in peace eternally. And it’s overseen by the granddaddy of tragically squandered potential, Oswald the Lucky Rabbit. Never heard of him? He was – make that is – Walt Disney’s first popular creation, but a squabble between Walt and Universal Studios meant Oswald would be banished to obscurity and his destiny rewarded instead to another big-eared cartoon rodent.

Above: When visiting Mickey Junk Mountain, feel free to stomp on a copy of Capcom's Mickey Mousecapade!

Above:Even the cutscenes have a style all their own

The two are not enemies in the game, though. Oswald’s built The Wasteland in according to Walt’s vision, so it’s an instantly recognizable doppelganger of Disneyland, albeit a bit darkened and skewed. There’s a crisis occurring here, and what Mickey’s estranged sibling wants more than anything is to get the famous mouse out of the Wasteland as soon as possible.

Above: Certain characters will seem familiar, although their appearance won't

I hate to spend so much of this review harping on the (back)story and characters, but the thousands of pieces of Disneyana tucked into every fiber of Epic Mickey’s being is inarguably part of the game’s charm. And recognizing them, especially for an animation enthusiast, is a wonderful, nostalgia-fueled game in and of itself.

Now for the game itself. It’s possible that I, as a Disney fan, was a bit more easily won over by the inspiration than someone with no vested interest in animation would be. But I think these are some of the most elaborate, well constructed platforming levels I’ve ever seen.

It’s not just about pointing out fifty-year-old Mickey posters, Tomorrowland rockets and the Nautilus from 20,000 Leagues Under the Sea (although… OMFG!), you’re also looking at some of the most complex, vast, and impressively branching game environments the genre’s ever seen.

Above: Mickey travels between worlds via 2D sidecrolling levels that reference his previous adventures

The gothic take on Disneyland has made for wonderfully realized meta-verse almost anybody will recognize immediately. Outside of a slightly crappy camera, I haven’t fallen so head over heels with the look, feel, and play of a third-person platformer since the original Banjo-Kazooie. And through it all, Mickey runs, jumps, and spins attacks with all the grace found in Mario Galaxy, only with collectibles Disney fans will find infinitely worthwhile.

Add to that, you’ve got the ability to restore or remove parts of the world with the power of Paint and Thinner. Add platforms, activate nodes, erase objects to reveal hidden items, solve environment puzzles, and use it as a passive or offensive weapon. The incalculable number of ways Mickey can interact with the world is simply staggering. And complain all you want about the lack of HD, but I haven’t seen anything on Move or Kinect that leads me to believe that those controls could pull off running at full speed while accurately firehosing gallons of paint with the grace of the Wii Remote. (Although, it’s probably just a lack of interest… Who’s up for more bowling?!)