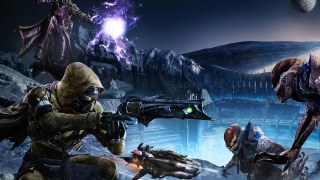 A lot of people think Destiny is about progressive mastery. That its greatest joys are in loot-gathering, and growing your character, and coming to understand all of the arcane systems and strategies required to master initially impossible top-level play. That it’s about tooling up, levelling up, training up, and taking on the universe with a similarly battle-seasoned group of friends. And it is, of course. But that’s not the best bit.

No, for me, the best bit is quite the opposite. It only comes around once every six months to a year, as new expansions drop, but damn, I look forward to feeling lost and confused in Destiny.

See, for me it’s an immediate, experiential encapsulation of the game’s systemic journey. Destiny’s career path is about starting out comparatively weak, growing stronger, and eventually becoming a magic space-wizard-gun-toting-Jedi master. Destiny’s fiction follows suit. You start out dead, which is about as crap as it can get, and by the end of the vanilla campaign you’ve saved the galaxy and made a name for yourself. From that point on, with every expansion, you’re the person they call first when shit hits the cosmic fan. Things get worse, but you keep growing. Hell, Destiny’s marketing follows suit. ‘Become legend’, anyone? But the most important part of that phrase is ‘Become’.

You see, without an affecting sense of feeling - and actually being - rubbish, there’s no meaning to getting better. Games like Destiny are about the journey, but with such a compelling, high-powered goal (and all of the gameplay delights that come with its attainment) it’s easy to lose track of the fact that it’s all about gradual, analogue progression, not a jump to the end of a binary bad/good scale. A journey needs two ends of equal importance, and it needs a lot of stages in between.

So feeling confused and adrift in Destiny is really important to me. It makes the later highs mean something beyond simply having a cool, overpowered gun that kills things in interesting ways. I could jump straight into any one of a great many shooters if I just want that in isolation. But it also, crucially, gives me a much greater connection to the game world as a whole.

Because that’s the other thing. You know how when you see a bunch of ants doing something on the ground, your reaction, give or take your level of entomological passion or phobia of tiny creeping things, tends to be something along the lines of ‘Oh hey, there are some ants’? You know how, although you’ll certainly notice that there are in fact some ants over there, and that - yes - they are indeed doing something, you won’t actually really care? Because you’re too big and they’re too small for you to have any real emotional connection to them or their doings? That’s what getting too powerful in a long-term progression game like Destiny is like.

The excitement of exploring that world, that reactive ecosystem of enemies, monsters, and miscellaneous dangers, where every new thing you discover or win is resolutely bloody earned? That goes away, and not just because of familiarity. It goes away because when you can one-button kill everything in a 30-foot radius, the world, its inhabitants, and therefore your place within it all, begins to feel less real. It’s fun to become a god, but God rarely gets to hang out at the pub. There’s a detachment that comes with power, and RPGs always end up dancing around that trade-off.

With Rise of Iron though - as with The Taken King, House of Wolves, and The Dark Below - I feel part of Destiny’s world again. I’m no longer some mystical demi-deity of guns and explosions, floating decadently around the outside of its reality and throwing the odd purple fireball in through the window for a cheap laugh. I’m an embedded part of it, the threat discussed in the narrative feeling tangible and important because I myself am also, once again, under threat. The game tells me that the SIVA Splicers are a real danger to civilisation, and because, for the first time in months, a simple Patrol enemy can kick my arse if I’m not careful, I believe it.

And Patrol areas are very important to this whole process. For a start, their free-roaming, open-world, do-whatever-you-like nature makes them fundamental to experiencing the real fabric of Destiny’s world, unsullied by objectives or level scripting. But this time around, the design of the new Patrol environment, the Plaguelands, has really upped the depth and explorability.

Hidden areas. Locked off fights and discoveries accessible with secret keys, the doors to which you won’t even be aware of unless you go seriously off-piste. An obscured route straight through into the Cosmodrome, the game’s first ever Patrol location - the first time any two such maps have been connected in Destiny. And beyond the arcanery, there’s the fact that Rise of Iron’s architecture has been designed with a much greater sense of crafted tangibility than in any Destiny expansion before. I talked in my review about how much better paced and curated the mission design is now, but the Plaguelands, with its more distinct locations and greater sense of attachment to the pre-collapse world, despite the desolate, snow-draped abstraction of the centuries since - hell, because of that - is an even more affecting point of connection.

As such, I am really, really enjoying getting lost in it. I am loving wading into big fights and sometimes only just scraping through. I am truly appreciating the pleasure of re-tuning and perfecting my class builds now that I really need them, and the specific play-styles they demand, to get by. Even old gear is fresh and exciting again, because what it does matters again. And above all else, I am getting the biggest kick out of researching as little as possible. Unless I absolutely can’t find the start point of a quest, or the location of a particularly niggly but vital collectible - and to be fair, Rise of Iron is much friendlier than Destiny-past in this respect - then my phone remains resolutely locked, and Google’s fast-track remains firmly untread.

Because I’m on a journey here. I’m on the most important part of the journey. I’m on the part that makes it a journey. This is the best bit, and with Destiny’s Infusion system meaning that I can now strike out a little more comfortably this time, with steadily powered-up versions of weapons I already know and love alongside the exciting, alien, new stuff, I couldn’t be better enjoying the act of getting lost, getting into trouble, and discovering what comes out of it all. Because something almost always comes out of it.

Destiny might have taken a lot of flack for failing to explain things in Year One, and in some cases rightly so. But sometimes confusion and mystery are exactly what you need to get excited, engaged, and connected again. And when it comes to refusing clarity, for not even having time to explain why, no-one does it better.