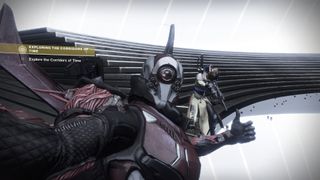 It was supposed to be a normal Tuesday for the Destiny 2 community. A routine weekly reset. The Season of Dawn roadmap didn't indicate anything was happening. As far as anyone was concerned, this was just like any other in-game week for the Guardian faithful.

But it wasn't to be. Instead, players logged in and were greeted by a mysterious new quest from the enigmatic Warlock, Osiris. He tasked players with exploring the Corridors of Time. It wasn't a lot to go on, but soon players were traversing the fabric of reality itself, room by room, trying to figure out one thing: why had this opened up, and what was the purpose? When players started their journey, it's fair to say not many were expecting to still be puzzling over the quest six days later.

Destiny's community has been conditioned to expect the unexpected. Puzzles and events that had no prior announcement have scattered the franchise's history. Corridors of Time is just the latest in a long lineage. The Outbreak Prime puzzle back in 2016 had the community scratching heads over number sequences and in-game screens. Early last year, while announced prior, nobody could have guessed the bizarre puzzle that Niobe Labs turned into. Quests like Zero Hour and Whisper of the Worm, two of the best in the game, were dropped without warning. While never knowing when something like this will drop, players are fully aware that it's always a possibility.

Eyes up, heads down

So what was the foundation of the Corridors of Time puzzle? There are two parts. The first tasked players with figuring out a sequence. Each room you enter has several doors with a symbol out the front, this would then lead to another room full of doors. This is the puzzle's input system. Player's noticed that obelisks (a new progression system introduced in the Season of Dawn) had sequences with matching symbols. When deciphered, these created maps which lead to new sets of combinations. As the community came together to share their codes, they noticed that some of the patterns matched. These were puzzle pieces. Putting the jigsaw together, they were able to chart a path through the corridors. Eventually, they got to a circular room with a grave at its center.

That took around a day. It seemed likely the end of the puzzle was in sight. In reality, players had only completed the tutorial. In the end room, players would get more and more puzzle pieces. Every hour their piece would change and every character would have a different one. Using the basis of the first puzzle, the player's got back to work. Only this time, the community would have to find over 5000 different pieces to create a much, much larger map. This would require thousands, if not tens of thousands of hours of manpower across many different disciplines.

Anyone could get involved by sharing the piece of the puzzle they got. That picture then had to be transcribed and imported into a spreadsheet to find matching combinations. Streamers had the job of energizing the community and keeping puzzle pieces coming, but there were many more behind the scenes. There were project managers, transcribers, graphic designers, data managers, technicians; everyone had a place in the effort if they wanted one. This was a community project.

It was mentioned by project leaders that gamers could solve global warming if you promised loot at the end. With this community, it's easy to see where that sentiment comes from. Destiny players love their game, and the Corridors of Time reciprocated that love. It seemed to show just how much trust Bungie has in its community. The scale of this puzzle is hard to wrap your head around, but it was never in doubt that it would eventually be solved. It took six long days and sleepless nights from 100s of people to work through the data and in the end, they did it.

However, this story has a complicated ending. Throughout the six days of this process, people wondered what exactly would be unlocked at the end. That's a lot of time for people to inflate their expectations. Surely if Bungie put out such a behemoth of an event, players would be well-rewarded. On Monday morning, a pathway was forged through the Corridors of Time using a 30 symbol code, and the players got their answer.

As discovered through a rousing eulogy from Saint-14, the grave we'd spent so long looking at over the past week, was our own. While this was a fascinating revelation with broader story implications, people wanted their loot. They wanted an exotic. And they got one... only, it was one they had already been promised. Bastion is an exotic fusion rifle that had been on the roadmap since the Season of Dawn was announced. Tuesday, January 28th, was Bastion day. After all that work had been done, the prize turned out to be early access to a single weapon. For such a monumental effort, it wasn't enough.

Expectations were sky-high. Many of the prevailing theories were it'd be a weapon from our past, to tie it in thematically to our time-traveling. Many thought we'd see the Destiny 1 elemental exotic swords Dark-Drinker, Bolt-Caster and/or Raze-Lighter because of the sword adorning our grave. Others touted the Vex Mythoclast, as the Vex species were prevalent through the questline. And of course, Gjallarhorn, because any time there is a promise of a mystery exotic, speculation of the return of the fan-favorite is never far behind. Early access to a gun just isn't on that same level, and the player-base let Bungie know about it.

As it goes, Bastion is fairly underwhelming. Unless you are a console PvP player, it's hard to see its place in any relevant meta. The problem wasn't so much with the weapon itself, though. Destiny has many mediocre exotics. Bad exotics are even locked behind difficult or arduous processes (I'm looking at you Tarrabah). Instead, the issue was two-fold. Firstly, it denied people of a surprise. If Bastion had not been on the roadmap, a new unexpected exotic would have been far more exciting. While data-miners can somewhat upend Bungie's secret plans, that mystique of mystery exotic would have still been exciting.

But the damp squib of a reward also tainted the trust Bungie put into the community. Everyone working together in concert walked across a tightrope over a deep chasm blindfolded. To then be told at the end there was a safety net underneath the whole time? It felt cheap, to say the least. No matter if the community has completed this or not, it turns out, we were going to get the reward regardless. It wasn't necessarily a betrayal of the achievement, but it at least undermined its sincerity.

A crack in time

Corridors of Time's legacy will likely overcome that disappointment though. Like the grave at the center of its mystery, the quest will remain a monument in Destiny history. As the saying goes, it's the journey, not the destination, and that's never been more true for Guardians than here. The community's effort, the magic that saw everyone come together, was special. Even if a new, exciting exotic had come out, people would likely remember excitedly sitting down to watch streamers work through spreadsheets more.

Bungie tasked the community with building a vast and functioning machine. Bit by bit, pieces were found and put together until it started to function as intended. What the machine does, or what it produced, is almost beside the point. Instead, the value came in the residue left behind from its construction. Streamers will remember their communities growing and record numbers in donations and subscriptions.

Those directly involved with organizing the effort will cherish the friends they made along the way. Those who merely sent in their codes can reminisce on that time they joined their favorite content creators in-game. Bungie, as it often does, provided a stage. The community, as it often does, took that spotlight and flourished. And this game, as it always does, brought people together through a challenge.

Destiny at its thematic core is about hope, human connection and overcoming obstacles through teamwork. Corridors of Time, despite its failings, proved that if you put those design principles out into the world, you can build a community that exemplifies those ideals.