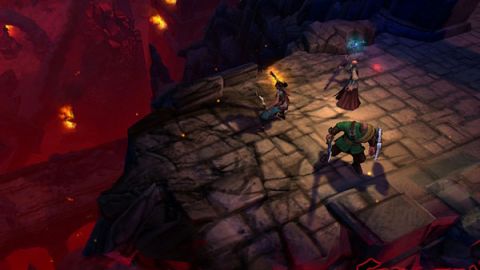 Crimson Alliance draws in dungeon crawler fans with its Diablo-inspired cabalistic visuals and the promise of monster butchering coupled with arcane loot; what they’ll actually get is a reasonably competent hack-n-slasher that’s more akin to the classic Gauntlet arcade series. Which is okay, actually. While the deflated RPG mechanics of the game won’t keep hardened Diablo fans interested, its bite-sized chunks of arcadey action will keep the less-grizzled grinders satisfied between triple-A role-playing sessions.

Above: Hungry for Diablo III? Try noshing on this hack-and-slasher.

So, it’s half past the apocalypse and most of the known world is still just recovering from the evil machinations of the recently defeated Soul Siren – a disgruntled sorceress who bears a striking resemblance to Lady Death. Portrayed through a series of still images, the game’s tale focuses on three “heroes”: a geriatric wizard suffering memory loss, an opportunist warrior who only fights for money, and a heartless assassin who…only fights for money. Voice work for this trio ranges from sub-amateur to comical at points with the wizard character attempting to muster his best Deckard Cain impression and the other two just sounding like bored American twenty-somethings. Fortunately, we’re not here to get lost in Crimson Alliance’s beaten-to-death RPG clichés. No, we’re here to get our hacking and slashing on.

Combat for each character is broken down into three separate attacks (yes, just three) and while each of these abilities differs visually, they all essentially do the same thing. You’ve got your basic melee damage, basic range damage and a stun attack. Likewise, each of these attacks levels up independently of one another based upon the three different types of equipment (yes, once again, just three), granting tiny increases in power during the game (i.e., the wizard’s ice wave becomes a bigger ice wave). You can also bolster your character’s power with consumable power-ups such as a deployable auto-turret that shoots nearby enemies or a healing totem that regenerates health for you and your allies. True, the design can come across as a little shallow; however, when put into practice, Crimson Alliance’s combat system helps to maintain that pick-up-and-play feel of ’90s arcade games while adding a modern twist.

Above: The crusty, memory-addled wizard can still dish out some hefty hurt.

All of the dungeons have been hand crafted. There are no randomized instances like in Diablo or Torchlight. The professional-level design coupled with the dark cel-shaded visuals makes for some pretty environments – a significant feat considering the majority of the game takes place in a series of dark mines, dank crypts and crumbling necropolises.

Unfortunately, there are some real pitfalls to the game design that hinder the experience. Pacing-wise, Crimson Alliance is incredibly slow to start and pits you against a series of similar enemies that offer no challenge whatsoever. It’s not game breaking, but the first few levels are a real slog. Another major gripe: the score multiplier. As you murder the countless denizens of whatever hellhole you’re venturing through, a multiplier in the upper corner of the screen will steadily increase. The game will then score you at the end of the level and award either a bronze, silver, gold or platinum trophy, which then translates into bonus gold for the group. What’s so broken about this setup is that the multiplier will decrease an entire number if you (or anyone on your current team) takes any damage from any of the dozens of monstrosities that occupy the screen at any given moment. Score chasers, beware – you will grow to loathe the score multiplier more than any other foe in Crimson Alliance.

Above: Even the most straightforward of adventures is elevated when playing with pals.

Another problem with Crimson Alliance is its pay structure. You can purchase the game for 800 MS points and only get one character, or you can shell out 1200 MS points and get all three characters. Likewise, you can purchase 40,000 gold for 80 MS points while shopping at item vendors instead of farming previous levels repeatedly. We’re not sure whether developer Certain Affinity is responsible for the pricing or Microsoft, but it would’ve made much more sense if the single character purchase was much cheaper. As it stands, Crimson Alliance comes across as either a normally priced game that’s missing two-thirds of the content or a premium download.

Slow to start but fun to play, Crimson Alliance can serve as a tasty snack if you find yourself between games. While the leveling mechanics are a little too shallow to keep true RPG fans invested, the dark cel-shaded visuals and easy-to-pick up combat system can make for a fun weekend with friends. Just be sure to make the right choice if you’re only willing to buy one character.