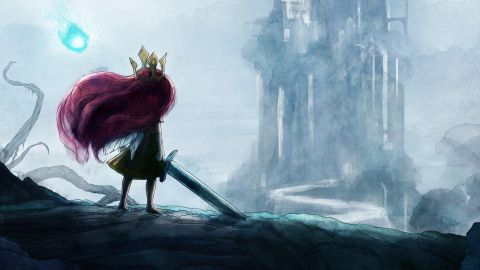 From the moment the title screen music swells entranced your mind and heart will be, For Child of Light is a playable poem: of purpose and love, life and loss
shrouded in mystery.

Okay, I'm not so great at the whole rhyming thing, but the stanza above pretty much sums up the experience of playing Child of Light. It's a video game fairy tale, one that manages to explore heavy themes without losing its sense of magic and whimsy. And every individual element--the story, art, platforming, combat, and especially the music--is superbly crafted, culminating in an unforgettable experience that ensnares the imagination with the unrelenting force of a bear trap.

The story does a great job of grabbing your attention right from the start. You play as Aurora, a young girl tragically ripped from the world we know and shoved into Lemuria, a magical land enveloped by darkness. There, she awakens lost and alone, and is told that only she can bring light back to the once-great kingdom. Aurora is a strong protagonist, one willing to face her fears head on, and do whatever it takes to overcome them. Along the way, she'll explore the world, meet companions willing to aid her in her quest, and battle hordes of the monsters born by darkness. The narrative teases you with mystery, continually hinting that something grim has come to pass both in Lemuria and the real world from which Aurora came. It keeps you eager to press on and discover why Aurora is seemingly the only hope for Lemuria's future, and how she ended up there in the first place.

Calling Child of Light a playable poem isn't a hyperbolic statement--the entire game is written in rhyme. The interesting stylistic choice is both enchanting and flawed. Some concessions are made for the sake of maintaining the sing-song dialogue. Certain stanzas are confusingly worded because clarity usually takes a back seat to structure, and it's not always immediately obvious what's going on in the story unless you take time to decipher the text. But these minor annoyances are worth the extra effort, as the writing gives Child of Light an authentic fairy tale / nursery rhyme feel.

As does the handdrawn art and orchestral score. Each of Lemuria's inhabitants and environments are rich with detail, and have a sort of watercolor look to them. Everything in the game appears as if it were something you might see in a children's book, again enhancing the fairy tale setup. And while the writing and art style serve as the foundation of Child of Light's artistic appeal, the accompanying soundtrack makes the whole adventure feel like an epic ballad. You explore Lemuria to the backdrop of a hauntingly somber piano theme (an incredibly gorgeous, yet isolating, track), and engage in boss battles while a frantic orchestral piece dramatically heightens the tension. The memorable score imbues Child of Light with an always-present sense of import and intensity, regardless of the task at hand.

During your adventure, you'll acquire crystals called Oculi, which add elemental damage and defense to your weapons and armor. Not only are these powerful upgrades be found by exploring the world, but you can also create them through a simple yet useful crafting system. Equipping certain Oculi throughout your travels will give you a crucial advantage.

All that said, Child of Light is much more than some mastercraft art project, thanks to its engaging gameplay. You explore Lemuria on a 2D plane, solving timed puzzles to overcome obstacles and progress. None are overly difficult, but plenty of them require a moment or two of thought to bypass. And because Aurora gains the ability to fly early on, there's a ton to see and do, as secrets are hidden not only on the ground, but also in the sky. As such, exploration is sometimes tricky because there's no way to keep track of where you've been and where you haven't, and you'll occasionally get turned around when trying to figure out where to go next. Still, the many stages usually feel like they're of an ideal size, and you can quickly teleport between them should you find out you missed something along the way.

Trekking through Lemuria isn't exactly safe, though--you have to cut down numerous monsters through surprisingly engaging turn-based combat. Fights initially seem pretty straightforward, but require tactical planning on your part. With proper timing, you can temporarily slow enemies and interrupt or reset their turns entirely. Because of this, even the most basic battles become tense and strategic. It takes some getting used to, as there's a lot going on when there's just you and one enemy on the screen, to say nothing of when multiple enemies join the fray.

Battles provide a fantastic sense of progression and pacing, too. Throughout most of the game, you'll level up after just a couple of fights, and doing so means gaining a skill point to spend in a character's extensive skill tree. It's like playing a JRPG without all the fluff and grinding, as a neat new ability or a passive power boost is just a fight or two away at any given time. And, because most fights are entirely avoidable, you can engage in them as you please. That being said, playing on the hard difficulty is definitely recommended for those looking for a challenge, as the tougher enemies mean slows and interrupts are crucial for survival. The first half of Child of Light's eight-hour campaign is a breeze; the latter half is slightly more difficult, particularly boss encounters, but is far from insurmountable.

Child of Light is many things: a fantastic, engaging RPG that doesn't overstay its welcome; a game with incredible art design and an equally impressive soundtrack; a virtual fairy tale whose characters are cool with sacrificing clarity so long as doing so means pulling off a sick rhyme. (I jest, it's endearing, really.) It's a memorable, creative experience that's more than worthy of the asking price.

From the moment the title screen music swells
entranced your mind and heart will be,
Okay I'm done trying to write pretend poems,
just go play the game it's awesome.