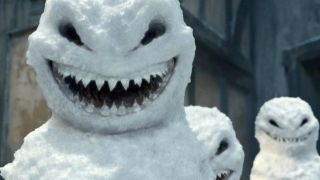 Nothing says celebrating the birth of a deity like nestling into the couch and binge-watching Christmas-themed content until your eyes bleed. Not all Christmas episodes are created equal though, so we asked the experts, our square-eyed staff, what their favorite TV Christmas episodes ever are. From science fiction snowmen to classic sweary British comedy, there's something for everyone here.

Doctor Who - The Christmas Invasion

The first Doctor Who Christmas special is also the first episode of David Tennant's beloved tenure as the eponymous Doctor - need I say more? Sure, Tennant spends the majority of the episode unconscious (he looks so peaceful when he sleeps), but Rose brooding over this stranger who is supposed to be her beloved Doctor is a fantastic core premise for the episode. How could this man be the Doctor Rose fought alongside? The dual struggle of Rose learning to trust him as he learns who he has become is handled beautifully, and when Tennant does get a chance to prance about as the new Doctor, he does so with his now-famous energy and gusto. Few television shows nail the Christmas vibe while actually delivering a quality episode, but Doctor Who has it down to a wibbly-wobbly, timey-wimey science. Alyssa Mercante

Vicar of Dibley - The Vicar in White

There's nothing quite as wholesome as the Vicar of Dibley, and the Christmas specials always left me feeling all warm and fuzzy inside. As amazing as the early Christmas special is - where the good vicar ends up having multiple roast dinners - I always loved the special two-parter where Geraldine Granger ties the knot and finds her own happy ending. In classic Dibley fashion, the whole lead up the marriage and the actual wedding itself doesn't exactly go smoothly, but it gave Dawn French's loveable character the send-off she deserved. Heather Wald

There's nothing like a British sitcom at Christmas. None of the Hallmark sheen, all of the awkward family interactions, disappointing presents and strange traditions. Not cauliflower though. Because cauliflower isn't traditional. The moment in Peep Show's Christmas Special where Jeremy pulls a 'Christmas Joke' on Mark, by pretending he forgot to get the turkey, is iconic. I can't quote any of it, however, because it is almost entirely made up of swears. It is Peep Show at its absolute best, which means it's uncomfortable, but hilarious. A real Jezzing. Ellen Causey

A recent tradition of mine has been to binge classic sitcom episodes on Christmas Eve, and they always start with this episode. Community made clowning on Glee (remember Glee?) into something of an art form, and this episode was the pinnacle of it. With a set of brilliant songs that were both catchy and hilarious (Baby Boomer Santa! Abed and Troy's rap! Britta's solo!) melded to an Invasion of the Body Snatchers style sub-plot that gave a necessary bite to the jokes.

What makes it stand out for me that it was more than happy to explore a sadder side of the holidays, revisiting how Abed found Christmas an isolating time, as well as taking stock of how things were getting increasingly dark on the show. This introspection is something Community did often (and well), and helps avoid the suffocating sweetness that some Christmas specials serve up. More importantly, it includes Britta's Christmas song, which always, always makes me laugh. Ben Tyrer

The pinnacle of Ricky Gervais’ career isn’t just the best festive spin-off of a popular TV show. It is arguably the most glorious 52 minutes (and one second) of comedy ever broadcast on UK television. This is David Brent’s pitch-perfect redemption tale, where we realize that underneath the chatter and the cringe he’s a stand-up bloke, whose try-hard ways mask insecurities relatable to us all. It’s the fond farewell to masterfully crafted characters - caricatures! - you love to hate, such as office wally Gareth and jobsworth area manager Neil. Most memorably, to the strains of Yazoo’s Only You, to the twinkling of a disco ball, to the shocked silence of their colleagues, it’s the impeccably timed union of the British Ross and Rachel. After two seasons of awkward flirting and audience shipping, Tim and Dawn finally share a kiss and disappear, hand-in-hand, tear-to-cheek, into the Slough sunset. “All I need was the love you gave, all I needed for another day…” No, *you’ve* been chopping onions. Did I say comedy earlier? Scrap that. It’s the most glorious 52 minutes (and one second) of any genre, period. Ben Wilson

Simpsons Roasting on an Open Fire

December 17 will mark 30 years since Springfield’s favorite dysfunctional family arrived on our screens with this episode – and very little since has topped its debut, a touching, heartfelt Christmas gift topped with a sparkling bow of really sweet humor.

Why I like it more than most Christmas specials, though, is how it really nails the family spirit over the holidays. You may want to kill them for 364 days of the year but, at the end of it, you all come together for one day. Like Christmas Day itself, the episode is a comfort blanket, one I keep returning to year after year because of how warm and fuzzy it makes me feel inside. The Santa’s Little Helper twist still gets me after all this time.

If you’re more familiar with the Steamed Hams and Sweet Candies of later Simpsons episodes, Simpsons Roasting on an Open Fire might come as shock. The animation is less clean, the jokes less rapid, but The Simpsons has never been about the memes – it’s been about one family staying together, despite everything else. This episode does it better than the 700-plus that come after it. Bradley Russell

Santa Claus Conquers the Martians has been roasted and riffed many times over since Mystery Science Theater 3,000 dug up the cornball kids' movie for its Christmas '91 episode. Each new satirical send up is a little gift of its own, but none will ever surpass the original for one key reason: the musical interlude. "(Let's Have) a Patrick Swayze Christmas" is just the best, and it remains my favorite musical number of the many fine compositions that MST3k has contributed to the novelty song canon. Written by a robot with an inexplicable love for the movie Road House, how could you not love a song that goes "I got the word that Santa has been stealing from the till / I think that that right jolly old elf had better make out his will!" Connor Sheridan

Doctor Who - The Snowmen

Over here in the ever-drizzly UK, nothing says ‘Christmas’ more than a Doctor Who Christmas special. This particular episode was right in the middle of Matt Smith’s portrayal as the Timelord - and the best one, fight me. In a plot that saw him stalk the streets of Victorian London in a battle against razor-toothed snowmen, a disembodied Ian McKellen, ice nannies, and his own misery, he gave us an episode that’s stuck with me ever since. While the 19th century embellishments make for good holiday season fun (is it even Christmas if someone in a top hat or bonnet isn’t singing carols beneath falling snow?), it shone because of its numerous guest stars. As well as a badass detective lizard and her partners - including the wonderfully daft Strax - the real draw was Jenna Coleman as Clara. I’d argue that this is her best portrayal of the character; her chemistry with Smith sizzles throughout the episode, layered with cheek and charm that didn’t necessarily translate to later seasons. What’s more, it taps into an aspect we’ve rarely seen since - one that frames the Doctor as a fairy tale character, one who lives above the clouds and elicits a captivating, child-like wonder. Benjamin Abbott

I don't know how, but at some point watching Toradora on Christmas became a tradition for me and some of my friends. Not the whole show, mind - brilliant as it is, we don't have eight hours to spare - just the Christmas episode. It's a great little rom-com, and the Christmas episode is not only packed with holiday cheer, but also memorable character moments which advance the story considerably and helped cement it as a classic. I'm quite the scrooge, so it takes a lot to get me to enjoy Christmas-themed anything, which just goes to show how good Toradora really is. Austin Wood

The Royle Family - The New Sofa

The season of cheer brings the best out of British sitcoms, with faultless Christmas specials for The Office, Blackadder, The Vicar Of Dibley, and so many more, but The Royle Family's 2008 special has to take the (Christmas) cake as 58 minutes of pure comedy gold. Given the countless times I've seen it, I could probably quote every line of dialogue to you from memory ("Trust you to get a turkey with only two legs Dave!"), but the scene of Ricky Tomlinson and David Best Sr. caroling together as a banjo/ukulele duo still makes for quintessential yuletide viewing. Now, who wants a leg?  Alex Avard