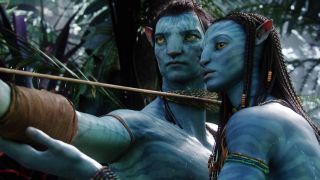 It's been seven years since Avatar made 3D the hottest Hollywood trend. I know, right? Still no sequel! But Cameron's procrastination aside, the film revolutionised the 3D medium by using it in a more artful way than ever before. It was no longer just about making the audience jump as weapons fly out of the cinema screen, but a major component in the storytelling process. A tool for adding visual depth and detail, if you will.

Sure, there have been a few hiccups and misfires along the way (ahem, My Bloody Valentine), and it remains controversial with some, but when it's good? It can be truly thrilling. Here's 25 of the best 3D movies.

The film: Seth Rogen and Reese Witherspoon head up an all-star voice cast for this funtime creature feature, which rips off the B-movies of the 50s with obvious affection and no little humour. There's plenty of retro references to keep the adults happy, while a cast of cuddly critters are on hand to charm the youngsters.

3D enhancement: This one opts for depth over audience-baiting tricks, although there are still a few schlocky moments that the original B-movies would have been proud to call their own.

Most eye-popping scene: The Godzilla-style smackdown between giant insect and giant robot is a guaranteed crowd-pleaser. Look at them go!

The film: Okay, so the genuine terror of the original has now been diluted in favour of gimmicky slayings and mind-numbingly irritating characters, but there's still plenty to recommend in this 3D outing, in which Jason's hockey mask makes its big-screen bow. Primarily that watching said characters get their arses handed to them is spectacularly good fun!

3D enhancement: Blades, harpoons, gore all of it comes hurtling out of the screen in an attempt to get a rise out of the audience. Subtlety is not the name of the game.

Most eye-popping scene: That will be when Rick gets his head squished by Jason, quite literally sending his eye popping into the audience. Gross.

The film: Brendan Fraser and Josh Hutcherson have a ball in this Amblin-lite adventure about an explorer and his nephew who head off to Iceland in search of an extinct volcano. Light-hearted high-jinks ensue in this solid slice of family entertainment that never takes itself too seriously and milks its 3D gimmick to the full.

3D enhancement: It feels as though the film was made to service the 3D, rather than the other way around. Fortunately, the 3D is such good fun that thats no bad thing at all. A T-Rex snaps his jaws out of the screen in the films opening gambit, and that pretty much sets the tone for the OTT antics that follow.

Most eye-popping scene: A chase sequence set in a mine car has the viewer feeling like they've stumbled into the best rollercoaster ride imaginable! Or they've become Indiana Jones.

The film: Everyone thought the 2010 sequel to 1982's Tron would have that "late to the party" feel to it. But the three-decades-late sequel manages to add a bit of pep to the tale, following the kid of Jeff Bridges' character from the first movie as he ventures into the tech-noir landscape of the grid.

3D enhancement: Part of its visual brilliance is down to the way the 3D is actually woven into specific parts of the story. The world of the grid comes to life as the movie bursts into colour and 3D. Less about 'pop-out' moments, and more about subtle nuances here and there.

Most eye-popping scene: OK, while the light cycle races + Daft Punk + Olivia Wilde stealing the show is the best part of the entire movie, 3D-wise it's the moment the frame scans the vast, sprawling expanse of the Grid. Depth, baby.

The film: The fifth and closing chapter of the series follows the similar path as its predecessors. An unlucky person is shown an eerily-gruesome premonition of a mass fatality, manages to avoid it and help others to escape the same grisly fate.... only for death to pick off the survivors one by one. Nicholas D'Agosto is the lucky chap who helps his colleagues off a suspension bridge in the nick of time.

3D enhancement: Unlike many horrors it was actually shot in 3D. Cameramen used a new form of hybrid camera on set, so there's no slapdash post-production conversion here! Blood squirts! Eyeballs pop! It's oh so stomach-churningly real...

Most eye-popping scene: One of the first to go, a young girl falls from the bridge and is skewered on top of a sailboat mast. That protrudes into the audience. Nice.