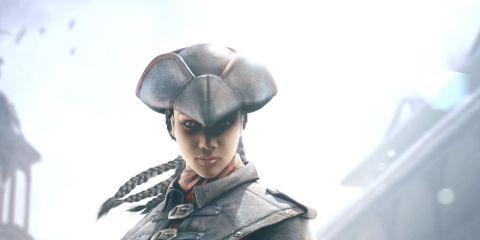 Aveline de Grandpré, the protagonist of Assassin's Creed III Liberation, is capable and deadly. Sometimes she charms Templars with her beauty, luring them to secluded areas before introducing them to death's cold embrace; other times, she stalks her prey from atop the rotting trees in a Louisiana swamp. But always, regardless of her mission, her motivations are just as murky and unclear as the alligator-infested waters of the bayou itself. Why did she join the Assassin Order? For what reasons does she bury her hidden blade into the flesh of her enemies? Don't expect to find out, because Liberation doesn't bother with providing context for much of anything.

It's a disjointed affair, one that expects you to just roll with the punches. Take, for example, the game's opening sequence. This tutorial has you playing as a young Aveline, who gets separated from her mother in a New Orleans market. Cue the jarring transition: It's suddenly a decade later. Here, it's implied Aveline's mom abandoned her that day at the market--oh, and by the way, Aveline's an assassin now. That's all the explanation you get.

This ambiguity permeates Liberation's narrative. It's hinted from the very beginning that Aveline's tale is one skewed by Templar bias. You are, after all, inside one of their Animus machines, and you see what the Templars want you to see--and they want you to see the Assassins as the enemy. This is a cool and interesting premise that acts as a solid foundation--unfortunately the story that's built upon it is vague and confusing. It's never really clear who's a friend, who's an enemy, or why any of them hate each other--and sometimes you--so much.

Thankfully, stalking and destroying virtual bad guys doesn't require a very strong voice of reason. Liberation's gameplay is its greatest draw, as it plays exactly like you'd expect any Assassin's Creed game to play. The combat feels just as fluid as ever, and it's quite amazing what Ubisoft has managed to accomplish on the Vita: Scaling buildings in the bustling streets of New Orleans, or shimmying trees in the muddy swamps of the bayou is a blast, and the animations here are easily the best we've seen in a handheld experience.

It's certainly a pretty game, and it's a surprisingly big one, too--but its size is sometimes a detriment. Finishing a mission on one end of the bayou and then having to slog back to the other end is a frustrating experience you'll encounter on more than one occasion. Sure, there are awesome treetop routes to take--but you might give up trying to find those routes when they aren't immediately obvious and swim through the swamp instead, which is frustratingly slow.

Some of Liberation's environments are brilliant. A series of dungeons in Mexico make up some of the game's best moments, as they combine incredible underground vistas with some truly amazing platforming. But most of the settings in the game are downright lifeless. There's hardly a sense of historical importance, which is a shame, considering one of the great things about the Assassin's Creed series is its attention to historical detail and the provision of factoids about the buildings and characters you'll encounter. Yes, a database exists, and yes, it provides info on key characters (and nothing else)--but this info is interjected with Templar propaganda meant to bring you to question which side is really the "good" side in the Templar vs. Assassin war. Again, it sounds neat on paper, but it's confusing in practice.

There are plenty of distractions to give you something to do along the way, though. As in other Assassin's Creed games, side quests are abundant: Slaves need freeing, bad guys need to be put down, and there's plenty of stuff to collect. Some of these mini-missions are enjoyable endeavors that pay out in healthy amounts of cash, which is used to purchase new equipment and storefronts. There's even an asynchronous multiplayer mode that pits Assassins vs. Templars in a slow-but-steady "choose your side" takeover of the world, as well as a neat little mini-game in which Aveline must run her own shipping business, buying products from some countries and exporting them for a profit in others. Other side quests, however, are mundane escorts.

Liberation's central mechanic of adopting different personas is meant to afford players the opportunity of choice when it comes to the mission approach. You can dress as an assassin, a slave, or a lady of nobility, each with more movement and weapon restrictions than the last. As an assassin, you have access to all your weapons and can parkour freely; the slave guise limits you to specific weapons, but allows you to incite crowd riots; and the lady persona restricts free running but lets you charm guards as escorts.

The persona mechanic is interesting during the rare occasions you're allowed to utilize it freely, but many missions force you to use a specific guise. Because some so heavily restrict how much parkour you can do or which weapons you can access, you may rarely feel the urge to adopt any persona other than the assassin--after all, jumping on rooftops is half the fun.

What's more, Liberation is pockmarked by a series of minor bugs and audio glitches. The issues likely won’t be problematic enough to actually turn you off, but needing to reset from a checkpoint after watching Aveline slip through the ground into nothingness will undoubtedly annoy you.

Liberation is definitely a bite-sized Assassin's Creed in more regards than just its price of admission. Aveline's a great character, but she's given too dim a spotlight. The gameplay feels right and contains most of the core tenets of what makes us love this series so much, but the whole experience is wrapped around a disjointed frame that's almost as off-putting as it is inviting. Die hard series fans and Vita loyalists will find some enjoyment here, to be sure, but Liberation's all over the place--and only some of those places hit the right notes.