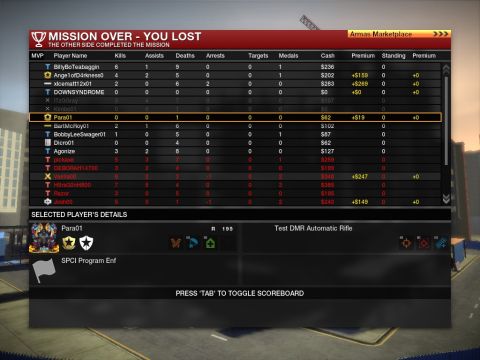 We really, really want to love APB (All Points Bulletin): Reloaded more than we do. Yes, the original APB was riddled with enough cracks and flaws to take it from diamond-in-the-rough to half-eaten-Ring-Pop-that's-shaped-like-a-diamond, but some of its more ambitious ideas were very nearly brilliant. And hey, Reloaded – for the most part – smartly tweaks APB's little problems while leaving its cops-and-robbers core undisturbed. On paper, it sounds like every wannabe grand automobile thief's dream come true. So then, what exactly went wrong?

Above: If only he'd just worn his safety belt

The short answer: A lot of things. First, though, it's essential to point out what went right, because – without a doubt – APB: Reloaded is a more enjoyable experience than its short-lived predecessor. APB's DNA – once a criss-crossing-crashing amalgam of MMO persistence and barely functional riffs on GTA's best ideas – has been straightened into a much finer point. Weapons now do more damage, resulting in faster, more satisfying firefights. Cars, meanwhile, actually possess unique driving models. In other words, no more sports cars that drive like minivans. There's also a teensy bit of weapon-usage-based stat progression to give you something to do beyond amassing a gun collection that'd make even John Woo's bullet-loving doves flee in terror. And then there's a real-money-based in-game store that... well, more on that in a bit.

In a lot of ways, APB fights desperately to be the antidote to modern MMO drudgery – sometimes to a fault. Beyond rudimentary side objectives (things like raiding stores if you're a criminal or returning stolen cars for enforcers), the game is essentially PVE-free. Missions auto-plop you into a group of fellow ne'er-do-wells (or loose cannon cops who don't play by the rules) and assign you objectives – for instance, investigate a vehicle or commit some nice, wholesome arson. The twist, however, is that your enemies aren't trash mob NPCs - they're flesh-and-blood members of the opposing faction. So missions unfold more like objective-based shooter matches, but in a completely open, vehicle-packed urban playground.

When APBR works, it really, really works. There's nothing quite like racing neck-and-neck against a sports car full of gangbangers – guns-a-blazing the whole time – toward an objective, crashing and twisting through the air like you've been punted by Godzilla, and then emerging from the wreckage into a hail of gunfire and, er, regular fire. Other MMOs, meanwhile, ask you to collect 20 boar gizzards because, f*** you, don't question it, chore peasant. Better still, similar chaos unfolds all around you, thanks to other groups on similar – though separate – missions. Bullets fly. Cars careen through the streets. Magic happens.

Before long, though, you can't help but see behind the curtain of explosions and car shrapnel, because that's pretty much all there is to it. Mission types are incredibly limited, generally breaking down into “find and deliver a thing,” “stop the other team from finding and delivering a thing,” and “hold a point for a really long time.” New self-contained “Fight Club” districts attempt to spice up the rather vanilla proceedings with large-scale team deathmatch and king of the hill battles, but the two currently available maps lend themselves more to haphazard lone wolfery and camping than interesting team tactics.

APBR's city, meanwhile, is utterly lacking in the loving attention to detail of, say, a GTA or the zany outlandishness of a Saints Row. It's just a sprawling sea of gray spotted with shamefully tiny islands of intrigue. So, by and large, APBR devolves into a very simple shooter with very simple modes in a very simple environment. On top of that, the story's basically non-existent. Occasionally, your contracted mission-givers will send you emails, but there's no sense of escalation or progression. It's just an unending tug-of-war between cops and robbers that never actually goes anywhere – a dynamic justifiable only if APBR is secretly set in Purgatory.

That general lack of personality becomes all the more disappointing when you start really digging into APBR's absurdly robust character customization suite. Once you've filled out your wardrobe and unlocked a few decal templates, anything's possible. So, of course, we created something that could best be described as the unholy offspring of Batman Beyond and the mopiest, most blue-haired JRPG character you can imagine. At one point, we actually encountered an incredibly authentic Harley Quinn – jester cap and all – and it was love at first sight. Then she shot us in the face. Long story short, APBR's players supply nearly all of its personality. And while that's an interesting idea on paper, it fails to thaw a frozen, unchanging world whose bag of tricks is about as deep as a drought-devoured puddle.

But what about all that free-to-play razzle-dazzle that APB savior GamersFirst can't stop clamoring about? Business models, after all, can make or break MMOs. And while APBR's “Armas Marketplace” certainly isn't broken, there are some very worrisome cracks in its armor. For one, the game constantly pestered us about biting a $10 bullet and signing up for a month of Premium access, and it's not hard to see why. Among other things, our piggy bank's valiant sacrifice more than doubled our end-of-mission cash rewards, hugely boosted our faction gains with mission givers, reduced cooldowns, and gave us a 20% discount on all marketplace items. Basically, Premium's the way APBR was meant to be played. Free, by comparison, feels downright sluggish.

Above: This is roughly what we imagine Storm Trooper cadet school to look like

Then there's the extremely sticky issue of buyable weaponry. Armaments that cost you an arm and a leg aren't necessarily better or worse than those earned by the sweat of your tattooed brow; they're merely different variations on similar ideas. So, ultimately, a kitted out character and someone who upped their arsenal the old fashioned way will be on a roughly even playing field after many hours of play. However, we were able to roll a completely fresh character and immediately buy a fully modded gun that many experienced players swore by. Suddenly, getting matched against fellow low rank players didn't seem so fair. APBR's early goings, then, can be a figurative trial by fire and bees. Because the fire wasn't bad enough.

APBR is a game that suffers from a serious identity crisis. It tries to be both an emergent, skill-based shooter and a full-blown free-to-play MMO, but only succeeds at falling into the abyssal middle ground between the two. Thanks to a number of tiny tweaks and larger additions, Reloaded is definitely a step up from the practically DOA APB that crashed and burned a couple years ago, but the two are still incredibly similar. Fundamental mission structure and variety flaws, unfortunately, stuck around for the ride, and its (improved) simplistic shooting and driving aren't enough to right those wrongs.

It's honestly heartbreaking, because many of the game's ideas teeter on the cusp of being revolutionary. As is, however, All Points Bulletin: Reloaded fires far too many blanks. Free is a tough price to turn down, but the city of San Paro is – at best – a vacation spot. We simply can't recommend an extended stay.