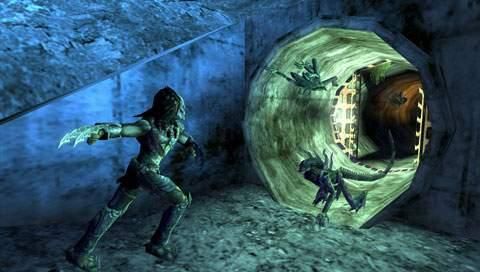 Developer Rebellion's Miami Vice was excellent. It was one of PSP's best games of last year. So what exactly went wrong with this new shooter? Where Miami Vice was a simple cover-fire game that worked a treat with the PSP's nubbin, Aliens vs Predator is overly complex and awkward to play - especially on the train.

Sure, AVP is a more open-ended game than Miami Vice - levels are larger and span open areas that need to be explored. Your goal is to find all the parts of your crashed Predator spaceship before the humans find everything and unlock the secrets of the alien technology. Using the cloak suit, it's easy to waltz past the human guards and Aliens, or you can hack at them to earn honor points. Every level pretty much follows this formula.

The problem is AVP tries too hard. Where Miami Vice had a simple control set-up designed around the PSP's single, restrictive nubbin, AVP attempts to wedge full PS2 gaming onto the handheld and we all know where that often leads... a clunky, frustrating game.