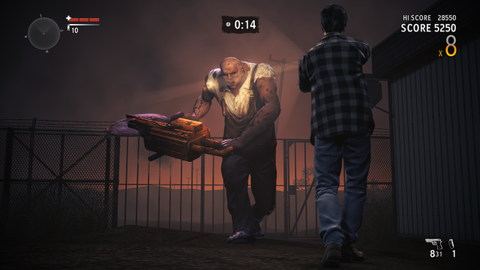 Though some will miss the inventive use of words becoming reality from the previous title’s finale, the shooting is more engaging this time around, partly thanks to a deeper armory. Hunting rifles and automatics are replaced by combat shotguns and machine guns that fit with the pulp fiction vibe. You unlock new weapons based on how many pages you collect, giving more value to the plot-enhancing collectible. The battles are further enhanced by a number of new enemy types, including giants that split into smaller men when hit with the flashlight and a creepy fellow that transforms into a flock of birds when you least expect it. This variety keeps the combat interesting for the many times you’ll have to fight your way out of somewhere.

The already exciting shooting has been so improved upon that it’s easily good enough to support its own mode. Called Arcade Action, the wave-based single player side game drops the player into a map, seeing if they can survive the time limit, and how many kills can be racked up in that time. Its complete removal of any plot might rankle some Alan Wake fans, but this variation on Horde was a great extra that proves the franchise’s gameplay is strong enough to stand on its own if it has to.

Those same fans bothered by the lack of plot in Arcade Action will be similarly disappointed if they expect the equivalent of a dense novel in this downloadable. Much like its Twilight Zone inspiration, this tells a smaller story, a brief interlude in Wake’s bigger narrative. Yet, even understanding that concept, the story lets us down occasionally, mostly due to repetition and a reliance on fetch quests.

Wake is constantly running back and forth to complete very similar goals. Finishing these tasks occasionally borders on monotony while simultaneously revealing that each area is much smaller than it first appeared, at times diminishing our enjoyment of the setting. Each location gets reused extensively to lengthen the game, but it ends up periodically stretching the content a little too thin.

Alan Wake’s American Nightmare ends up being more inviting than ever to new players, with a clearer plot and goals. The game knows what it does well and highlights it instead of trying too many hit or miss concepts. Despite the sometimes limited scope of its world and objectives, it’s a great downloadable that hopefully will introduce a whole new audience to one writer’s unique world.