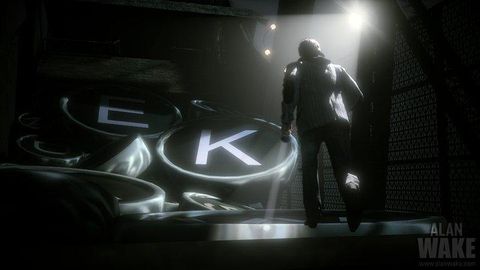 Remedy's Alan Wake, an oft-delayed but critically acclaimed Xbox 360 exclusive, is getting a re-release on the PC--complete with all of the DLC add-ons--and we’re digging back in for another trip to Bright Falls to battle the Dark Presence in this great story-driven thriller.

You play as the titular Alan Wake, a famous novelist from New York City who is taking a much-needed vacation to relax in rural Washington. The game begins with Wake suffering from a terrible nightmare wherein he is chased by a man he thinks he murdered, setting the tone for a game that explores the dark recesses of Wake’s mind. But he is soon awoken by his wife on a ferry headed for the town of Bright Falls, tucked deep within beautiful forested mountains.

What begins as a quirky journey through a plucky mountain town soon spirals into a bizarre, unsettling tale of subconscious fears and mystery. However, the story’s impact is somewhat weakened by third-person shooter gameplay that never quite fits with the theme of the story.

As the Wakes arrive at their cabin, Alan’s wife falls into a lake and appears to be dragged under. Just when you think she’ll drown the scene goes black as Alan jumps in after her…then reappears showing him in a car accident, having slammed against a tree on the outskirts of Bright Falls and displaying a serious head wound. Which part actually happened? Both can’t be true. Or is there something at play in Bright Falls with the ability to make both true?

The game persistently swaps between dream states, fugue trances, delusions, and occasionally reality as well, though it’s often impossible to tell which scene falls into which category. Wake believes the town is being overrun by something called The Dark Presence, a powerful shadow entity that possesses town folk and ravages the landscape.

All of this lends to one of the game’s shining achievements: an unreliable narrator. Alan Wake is not a projection of the player or a shining hero like most other video game protagonists. He’s a complex individual, complete with subconscious troubles and mental hang-ups. Throughout the game, it’s never clear whether or not you can trust Wake’s point of view. He even says so himself, at one point. Remedy creates this confusion by weaving together no less than six different types of storytelling, from omniscient narration to radio broadcasts to collectible leaflets of the game’s script foreshadowing key moments.

When it launched in May 2010, the cliffhanger ending left many people unsatisfied, but subsequent DLC filled in many plot holes and delivered moments of high tension. Fortunately, that won't be an issue if this version is your first experience with Alan Wake, as all of the content is included in the package.