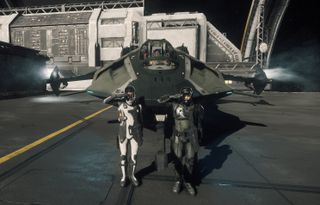 Star Citizen is the most crowdfunded thing, er, ever (unless you count actual charitable donations, I guess). The space game from Chris Roberts, AKA that Wing Commander guy, has attracted more than $124 million from folks who are eager to find their future in the virtual stars. But there's one big problem: the game was first funded back in 2012, with a planned release date of 2014, and today you can still only play a few chunks of it.

Star Citizen has become one of the strangest stories in modern gaming, and our pals at GR+ sister site Kotaku UK did a massively deep dive into how it got where it is today. And you should definitely read it. Before you do, check out these 5 ways Star Citizen has proven that more crowdfunding isn't always a good thing.

It was supposed to be a modern Wing Commander

Star Citizen wasn't initially pitched as the fictional-universe-spanning-everything-simulator that it has become - even if that was always the glint in Chris Roberts' eye. The idea was for a modern, single-player-focused successor to Wing Commander, the cinematic space combat game from 1990 (and for a game that would make good on the early promise of Freelancer, another Roberts project that came out in 2003). The super ambitious multiplayer universe stuff? That was stretch goals.

Stretch goals can be a nicer way to say "feature bloat"

Jones said he was relieved when the team finally decided to stop adding in new stretch goals and focus on what it had already laid out. But by then, the project had already gotten a whole hell of a lot bigger than anticipated - Roberts said the actual goal was $2 million overall, but it ended up bringing in three times that much across Kickstarter and Star Citizens' dedicated site. And that was before it started selling virtual ships for pre-order to its backer audience. Sometimes very expensive ships.

Your groundwork might start feeling too small for your budget

One anonymous source from inside the studio said everything seemed reasonable when Star Citizen was meant to be a "nostalgic, spiritual successor to Wing Commander". But Roberts' ambitions - and promises to fans and press - grew as the money did. And the little "vertical slice" that the studio had put together to demonstrate Star Citizen's potential, built on the CryEngine tech that powers Crysis 3 and Evolve, seemed a bit puny by comparison.

“It was clear that CryEngine wasn't up to the task,” the source told Kotaku UK. “CryEngine was a fine pick when $500,000 was all they were looking for and they needed tech to build a game on. You can't build your own engine for $500,000. But you can with $100 million. In order to make Star Citizen work it needs proprietary tech. A lot of what was happening was to do with rewriting CryEngine in order to make it do what was needed. That obviously slowed everything down”.

The bigger it gets, the slower it goes

Roberts argued that Star Citizen's super-ambitious scale (from corridor combat to traversing galaxies) and commitment to seamless fidelity at every level meant it was always going to require new tech, with all the difficulties that entails: “It's better to have your engineering considerations taken care of now, rather than trying to retrofit as you go along,” Roberts said. “It definitely is a harder approach to take, but I think long-term it will build a better foundation”.

Roberts looked to games like World of Warcraft and EVE Online, both of which remain popular after being online for more than ten years. He says Star Citizen needs this substantial back-end work to still be relevant in a decade. But it does mean that backers who were hoping to get their game back in 2014 - the original proposed release window - may be a little disturbed by the game still being deep in development, with just a handful of discrete modules ready to be played by the public.

Star Citizen may still work out, but it will be anything but easy

Four years and millions of dollars worth of virtual ship deeds later, Star Citizen has never been more divisive. If you give the benefit of the doubt to Roberts and his uncompromising approach to creating the best space game ever it still seems very feasible; the feature sets are defined, the production pipelines are humming, and it's all a matter of time. But if you take an uncharitable view, all these people funneling money into one man's grand vision year after year starts to look a bit… well, "cultish" is such an unpleasant word.

Even if you decide to keep your wallet and your dreams of a virtual life in space separate (the company has honored many requests for refunds from folks who have changed their minds), Roberts implores you not to judge the product based on its current state: “The race isn't finished yet. Wait till the finish line is crossed and then I'll say people can make judgments about whether it was the right way or not. Instinctively, it was the way that felt right to me.”