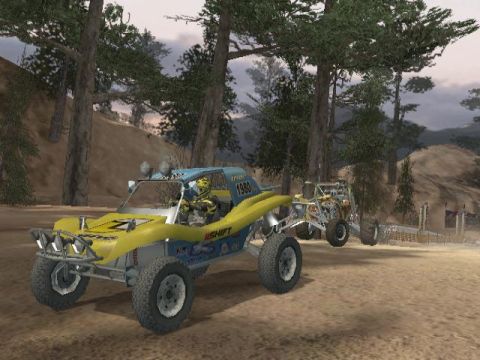 Attention all dirt-junkies: the wait is over. Sony and Climax have finally unleashed the latest game in their ATV series, ATV Offroad Fury 4, and while the series seems to be slowly exhausting itself (seriously, how many times can you milk such a concept?) this newest entry into the series provides enough content to please diehards and newbies alike.

In addition to loading the game with several gameplay options, such as single event races, championship races, and a new career mode, the dirt gods have also given us over thirty different vehicles to race with. Branching out from ATVs, we're tossed into dirt buggies, trucks and motocross bikes, amongst others. And while the overall handling for each unique vehicle is solid, some work better than others.

But the real star of the game is the ATV, as should be expected, and once you really get into the swing of things and anticipate another round of ass-kicking goodness, your mojo is drained when you're forced to switch vehicles.

Speaking of draining mojo, the non-playable racers have a habit of rubbing you the wrong way. When they're not landing on top of you or pushing you into a bale of hay, they somehow manage to sneak up on you at the last possible second and leave you in their dust.

But these are minor quibbles. Overall, the game works brilliantly, and the other racers do manage to stay out of your way most of the time (with an emphasis on most ).

Major credit has to be given to the track designs, which are always innovative and never boring. The crew over at Climax really outdid themselves when it came to designing and laying out the tracks. While a few do offer your basic, boring 'round and 'round design, most sport sharp turns, sweet jumps and enough shoulder-hazards to keep you gripping the controller, sitting on the edge of your seat and playing round after round.

And with beautiful, crisp graphics (some of the tracks look amazing, considering that this is current gen hardware) the sense of speed and danger is always prevalent.