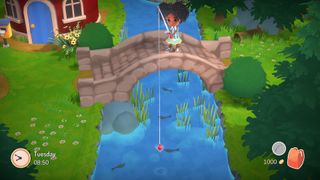 If you’re desperate for Animal Crossing but only have a PC, Hokko Life may be the next best thing. Coming from a single developer named Robert Tatnell, Hokko Life is unmistakably an Animal Crossing-inspired game due to hit Steam Early Access later in 2020.

Arriving on a train, catching bugs with nets, or fish with rods, and decorating your home in a quaint town of bipedal, talking animals - the staples are all there, but Tatnell hopes to out-Nintendo the publishing giant by invigorating the formula with much more player creativity. See some of that in action in the reveal trailer below.

Furniture can be customized and players can decorate their homes and walls and clothing with many more options. Most interesting of all is that players will be able to sell their creations to other players in a future update. Farming and fishing are also meant to be a bit more involved than Nintendo’s take on the genre, which likely means Tatnell is taking some inspiration from Harvest Moon and others in the genre too.

Tatnell has a background in game art design, previously working on titles such as Heavenly Sword and Fable 3, so it’s no wonder he’s been able to so closely capture the aesthetic of Animal Crossing, despite his conscious choice to make the townsfolks’ heads much more mascot-like.

Everything else, from the sounds they make when they talk to even the kinds of animals they are immediately - and deliberately, no doubt - spring to mind images of Nintendo’s beloved life sim. Hokko Life is due to hit Steam sometime in 2020, though nothing more specific than that has been mentioned yet.

While we wait for Hokko Life, check out everything we know so far about next month’s Animal Crossing: New Horizons.