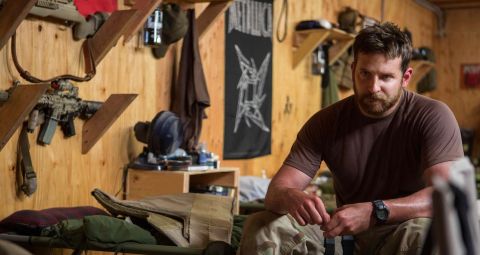 During four tours of duty in war-torn Iraq, Navy SEAL sharpshooter Chris Kyle notched up more confirmed kills – 160 – than any marksman in US military history. Assigned to provide ‘overwatch’ to troops on the ground, he’d routinely pick off gunmen, bombers, even women and children – a lethal aptitude which saw him nicknamed the ‘Devil of Ramadi’ and have a $80,000 bounty placed on his head. Honourably discharged in 2009, he returned home to his family, wrote an autobiography and used his skills to help other veterans adjust to civilian life… until fate lent his story another dramatic twist.

Kyle’s was a life of tension, high drama and shocking, inexplicable tragedy, all of which are handled sensitively and respectfully by director Clint Eastwood in a biopic that feels like one seasoned professional’s salute to another. Its subject is a man who does a difficult job well, a man of violence whose pursuit of perfection points paradoxically to the soul of an artist. “I’m not most men, sir!” Kyle splutters during a Marine training regime which sees him drenched, harangued and browbeaten by hard-arse sarges not unlike the one Eastwood played in Heartbreak Ridge. Indeed, Sniper takes pains to show Kyle as a man apart, not least in visits home that see him grow progressively more distant from worried partner Taya (Sienna Miller).

It would be easy for Kyle to be a conservative’s wet dream, a two-dimensional poster boy for stars ’n’ stripes jingoism. Yet Bradley Cooper does something more subtle, layering Chris’ devotion to “God, country and family” with the blinkered befuddlement of one unwilling and unable to acknowledge his own human frailties. Bearded, muscular and steely-eyed, he exudes the unshakeable conviction of a man who knows what’s right and the wrongs he must do in order to protect it.

Kicking off with Kyle aligning his crosshairs on a Fallujah woman with a bomb in her burqa, Sniper follows it with a gripping series of life-and-death calls that recall The Hurt Locker in their power and urgency. Kyle’s cat-and-mouse conflict with his Syrian nemesis Mustafa, meanwhile, brings to mind Jason Bourne’s encounters with his fellow Treadstone operatives.It’s perhaps inevitable that the scenes on home soil don’t carry the same charge, taking on a repetitive tone. But after the dull misstep of Jersey Boys, it’s good to see Eastwood back on target and firing live ammo.